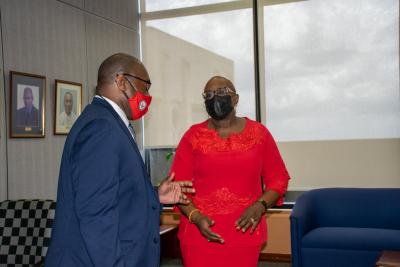 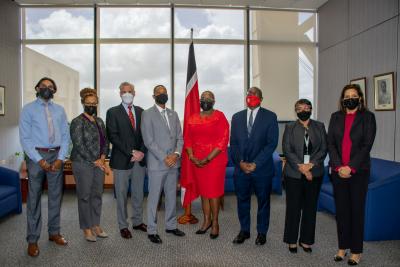 In six to eight months Trinidad and Tobago will be the office/headquarters of the USA International Development’s Regional Representative for the Eastern and Southern Caribbean (USAID/ESC), Clinton White.  This will be the first USAID office with headquarters in the Caribbean Region.

The Honourable Camille Robinson-Regis, Minister of Planning and Development met with the Chargé d’ Affaires of the Embassy of the United States of America, Mr Shante Moore along with Mr Clinton White and Phillip Schwehm of USAID/ESC today (Tuesday 21, September 2021) at the Ministry of Planning and Development’s Head Office, Port of Spain. The opportunity to meet was welcomed by Minister Robinson-Regis, who also extended gratitude for the agency’s support and assistance with Climate Change matters, as well as proposed technical assistance in digitizing of the National Census to be conducted soon.

The USAID/ESC’s Mission’s for the 2020-2025 Regional Development Cooperation Strategy (RDCS) is to support the ESC in creating “a safe, prosperous, and resilient Caribbean region that supports its vulnerable populations, withstands external shocks, and promotes accountable institutions, economic development, and private sector-led growth.” The office to be established within the United States Embassy in Port of Spain will allow for effective communication and engagement amongst USAID/ESC and Island States within this region.

Mr. White, the representative of the USAID/ESC, expressed that Trinidad and Tobago is viewed as a leader in regional development and diplomacy as such, establishing an office within Trinidad and Tobago augurs well with accomplishing the USAID/ESC’s strategies and goals articulated in the Eastern and Southern Caribbean regional development cooperation strategy 2020-2025.

Minister Robinson-Regis also acknowledged that an office located in Trinidad and Tobago is a high point, as she stated “Trinidad and Tobago has always been seen as an influencer amongst our brothers and sisters in the region, as such we have to be circumspect in our actions and what we do, so they can be copied and appreciated, therefore we look forward to developing this relationship further.”

One of the areas to be noted is the Agency’s ongoing work in battling the effects of COVID -19 through the provision of vaccines via the COVAX initiative to accelerate the delivery of COVID-19 Vaccines globally and equitably. Mr White indicated that the agency has partnered with the Pan American Health Organization (PAHO) and United Nations International Children Emergency Fund (UNICEF) not only for the delivery of vaccines, but also in efforts to decrease vaccine hesitancy within the region.

Minister Robinson-Regis identified vaccine hesitancy as a key area for possible collaboration and Mr White recalled the recent successful hosting of discussions with religious heads to debunk the lack of confidence in the vaccines and the misinformation being generated within religious communities. It was agreed by both parties that this is of major concern and as such more work and effort is to be exerted by USAID/ESC in this area.

Ongoing, it was agreed that Trinidad and Tobago’s initiatives in the areas of public/private sector partnership projects, coastal erosion mitigation, climate change initiatives, renewable energy projects inclusive of solar and electric technologies, will be the focus of institutional strengthening, technical assistance and digital development expertise.

Trinidad and Tobago will also be eligible to apply for grants through the CARICOM Fund, of which the USAID/ESC is a partner.  This Fund is administered via the Caribbean Development Bank to assist financially in areas identified under the funding program.  It was also agreed that a closer working relationship is to be established with the United States Embassy via USAID/ESC so as to achieve the goals and vision of the Trinidad and Tobago Government and the United States of America.