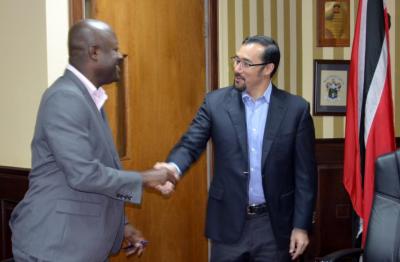 This was the first formal meeting between the Minister and the new Prison Officers Association Executive following the Association’s elections earlier this year. In attendance were President of the Association Mr. Ceron Richards; First Vice President Mr. Leon Bute and General Secretary Mr. Lester Walcott. Also present at the meeting was Permanent Secretary at the Ministry of National Security Mr. Vel Lewis.

The Association’s Executive expressed gratitude to Minister Young for his efforts in maintaining a steady pace in addressing their concerns. The Association also confirmed that distribution of the recently delivered stab proof vests had begun, stating that this has given prison officers a greater sense of security while performing their duties.

Minister Young also updated the Association on progress being made on current projects to improve service delivery within the Trinidad and Tobago Prison Service. The Minister expressed his full commitment to continue to work towards strengthening the organization.

The meeting was cordial and productive and both parties pledged to continue to work closely together.