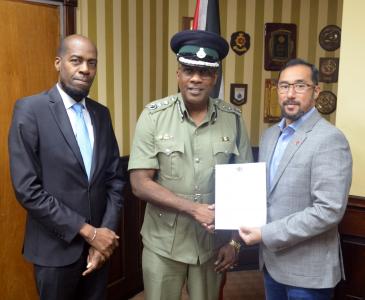 Mr. Wilson has been promoted to the rank of Commissioner of Prisons by the Public Service Commission with effect from November 24, 2017.

Commissioner Wilson has over thirty-five (35) years’ of distinguished service in the Trinidad and Tobago Prison Service.

In his congratulatory remarks, Minister Young commended Commissioner Wilson for the on-going work of the Trinidad and Tobago Prison Service in executing its mandate to hold and treat offenders, especially through the continued administration of cognitive, technical and vocational rehabilitative programmes, aimed at equipping offenders for reintegration into society. The Minister also took the opportunity to assure the Commissioner that the safety and security of prison officers remain a top priority for the Ministry of National Security.

The Ministry of National Security extends congratulations to Mr. Gerard Wilson on his promotion and appointment as Commissioner of Prisons.