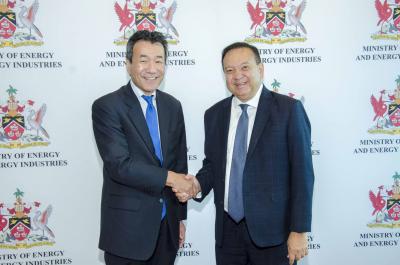 Senator the Honourable Franklin Khan, the Minister of Energy and Energy Industries met with Mr. Tatsuo Hirayama the Japanese Ambassador Extraordinary and Plenipotentiary to Trinidad and Tobago at the Ministry’s Office on August 7, 2019. Also in attendance at the meeting was the Permanent Secretary is the Ministry of Energy and Energy Industries – Ms. Azizah Baksh-Backredee and other Senior Technical Officers.

The Meeting focused on the ongoing Methanol to Dimethyl Ether project, which is the largest foreign direct investment from Japan in Trinidad and Tobago. This Government has a financial stake in the project with twenty percent minority shareholding through the National Gas Company of Trinidad and Tobago. The Mitsubishi Corporation shareholding is seventy percent and the Massy Group of Companies ten percent. The Japanese Bank for International Cooperation is providing the financing.   This is the only plant to be built in this country, in this decade as the last plant completed construction in 2010.

Minister Khan reiterated that the Government values downstream investment and that further downstream initiatives are even more valued. The Japanese Ambassador extended an offer of support with respect to Energy Efficiency to this country similar to what was offered to other Caribbean countries.

Minister Khan gave an overview of the Energy Efficiency landscape within Trinidad and Tobago, with this country being a signatory to the Paris Accord Agreement, and agreed to have ten percent (10%) of its power generating capacity produced by Renewable Energy by 2021.

The Japanese Government has proffered a Memorandum of Understanding (MOU) regarding Energy Efficiency to this country, and this is currently being processed.

TT One Link: One stop-shop for all Government products and services
HDC is working with state agencies to deal with flooding in La Horquetta
Closure of Siparia District Court
Arrangements at the Town and Country Planning Division (TCPD) for the Period August 03, 2020 to August 14, 2020
Trinidad and Tobago COVID-19 (Novel Coronavirus) Update # 376