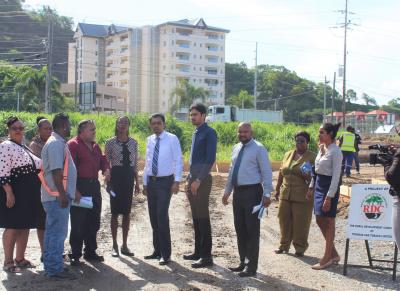 Minister of Rural Development and Local Government, the Honourable Senator Haji Kazim Hosein, was accompanied by the Ministry’s technical team, the Diego Martin Regional Corporation Chairman, Ms. Susan Hong as well as Mr Jason Kissoon, CEO and Mr Daynish Maharaj, Member of the Board of Directors of the Rural Development Company (RDC) on a visit to various completed road rehabilitation sites across the region of Diego Martin.

Minister Hosein expressed great satisfaction in the works being done through the state agency, RDC saying, “It is always good to see value for money and more so good work being done by persons contracted to do so. These road works will ensure that the people of these communities are able to easily access goods and services to and from their homes.” He further added, “Many of these projects are main access roads for residents that allow them to access basic services; and this is what local government is all about, bringing those services to the people through these infrastructure works.”

As part of the rehabilitation works tour, Minister Kazim Hosein also made a stop at the West Park Savannah to gage the progress of works being conducted through the RDC which was mandated to construct a secondary access road for West Park. This new road will accommodate traffic in and out of West Park. This project, which is under the purview of the Urban Development Corporation of Trinidad and Tobago (UDeCOTT), is expected to be completed in August 2019 and will provide not only traffic alleviation but also a safe jogging track for fitness enthusiasts.

The other projects visited were; Sarganger Trace in Four Roads, La Estancia Road, Universal Drive and Mercer Road in Diego Martin. At the various sites, Minister Hosein also engaged with residents who took the opportunity to share some of their concerns.