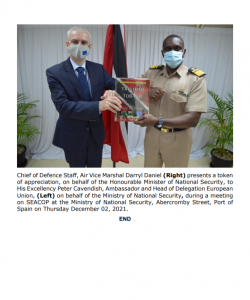 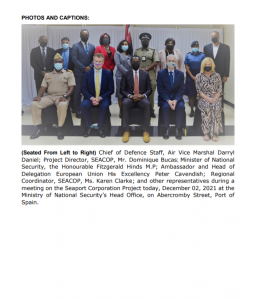 Port of Spain: Minister of National Security, the Honourable Fitzgerald Hinds M.P. held a meeting with Ms. Karen Clarke, Regional Coordinator and other officials of the Seaport Corporation Project (SEACOP) today, December 02, 2021. The meeting took place at the Ministry of National Security’s Head Office, on Abercromby Street, Port of Spain.

Ms. Clarke and the other officials of SEACOP were presented to the Honourable Minister, by His Excellency Peter Cavendish, Ambassador and Head of Delegation of the European Union.

SEACOP is one of seven (7) projects under the wider European Commission-funded Cocaine Route Programme (CRP), which is aimed at effectively addressing the broad spectrum of challenges presented by organised crime and drug trafficking, particularly cocaine trafficking.

SEACOP supports beneficiary countries by reinforcing their capacities to combat illicit maritime trafficking and associated criminal networks, and enhances international cooperation in tackling illicit maritime trafficking on the transatlantic cocaine route (West Africa, Latin America and the Caribbean). Its activities include the creation of inter-agency units in key ports, as well as the establishment of a national maritime information system, to promote information sharing. The 5th Phase of SEACOP (SEACOP V) began in May, 2021, and is scheduled to end in December, 2023.

Minister Hinds welcomed Ms. Clarke and emphasized the importance of SEACOP to the safety and security of not only Trinidad and Tobago, but to the wider world, and underscored this country’s commitment to the success of the Project.

Ms. Clarke thanked Minister Hinds for his warm welcome and praised Trinidad and Tobago for the successes achieved under the Project thus far. Areas to be focused on under Phase V were discussed, with specific reference being made to the regional synergies to be established, in order to ensure the continuation of similar operations, beyond the term of SEACOP V.

Discussions concluded with both parties pledging to continue working together, in the interest of implementing the SEACOP V in Trinidad and Tobago, towards the increased security and safety of our citizens.