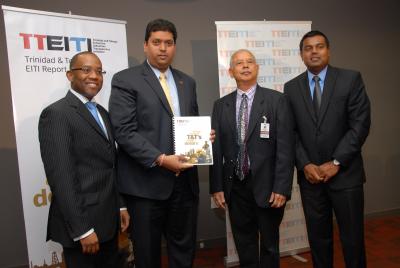 The report which is the first independent reconciliation of the country’s energy sector revenues, was prepared by an independent “EITI Administrator”, comprised of a local-foreign accounting firm partnership, BDO Trinity Limited and the Hart – Nurse Group of the UK. The EITI report reconciles revenues reported to have been paid to the government by the major oil and gas companies operating in the country, with the revenue reported to have been received by the government. The reconciliation took place between March and September 2013.

Trinidad and Tobago’s first EITI Report, which covers Government’s fiscal year 2011 (October 1 2010 to September 30, 2011), showed that the biggest contributor to revenue was Petroleum Profit Tax ($9.1 billion) which is levied on both oil and gas production.  Supplemental Petroleum Tax, which is only collected against oil production, was the second highest contributor ($4.2 billion). In terms of individual tax paying companies, bpTT was the single largest contributor to Government revenue in fiscal 2011 with payments totalling more than TT$9.9 billion followed by the state oil company Petrotrin with contributed revenues totalling more than TT$3.5 billion.

Government’s reported revenue collection figure of TT$23.181 billion was TT$73 million less than the TT$23.254 billion reported as paid by the 17 reporting oil and gas companies. This difference represents 0.3% of the companies reported payments. In reporting this outcome of the reconciliation exercise, the independent EITI Administrator advised that the differences found “…relate to (i) differences arising from the use of different exchange rates by the Government and companies in converting foreign currency payments and (ii) a timing difference on the receipting of a payment made by a company to the Government before the end of the fiscal year which was receipted by the Government after the fiscal year. Payments made in foreign currency were reconciled in the currency of payment”. The Administrator reported that “no unadjusted differences” were found during the reconciliation exercise.

In a speech marking the handover of the report and its contents by Mr. Victor Hart, Chairman of the Cabinet appointed Trinidad and Tobago EITI Steering Committee, Minister Ramnarine stated “The publication today of Trinidad and Tobago’s first EITI Report represents the first independent reconciliation of Trinidad and Tobago’s oil and gas revenues, a most significant policy and paradigm shift as it relates to transparency, accountability and good governance on the part of the state. Ultimately I expect EITI reporting to bring about a greater level of public engagement and discussion about the management of our country’s natural resources. And to become as much a part of the national lexicon as the Ryder-Scott report, which performs a similar assurance function with respect to our oil and gas reserves”. The EITI report can be found on the TTEITI website at http://www.tteiti.org.tt/category/eiti-reports/.

The EITI is a global standard for ensuring transparency of payments from natural resources providing transparency and accountability in the extractive sectors (oil, gas and mining) through the annual publication of payments made by companies to governments, independently audited and reconciled with government’s declared receipts. Established in 2003, the EITI is currently being implemented by a coalition of Governments, Companies and Civil Society Organisations in 39 of the 53 countries around the world considered to be rich in natural resources.

The Government of Trinidad and Tobago acceded to the EITI’s principles in December 2010 and was accepted as a Candidate Country of the EITI in March 2011.

The Trinidad and Tobago EITI (TTEITI) Multi-stakeholder Steering Committee, chaired by well know Transparency advocate Victor Hart, is fully representative of the three stakeholders: government, extractive companies and civil society. The TTEITI Steering Committee, in conjunction with the Ministry of Energy and Energy Affairs, is charged with the implementation of the EITI and recognizes the key role to be played by stakeholder engagement and public awareness to achieve EITI compliance in Trinidad and Tobago.

Ministry of Energy and Energy Affairs