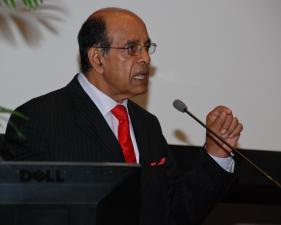 A pleasant good evening to one and all present here this evening.

I am truly honoured to be here, at this event, one which pays tribute to some of our nation’s greatest minds and literary heroes over the past five decades in the year when we celebrate our Golden Jubilee of our Independence, and as we do this, I’m reminded of the words of an American author and historian called Barbara Tuchman, who once said:

“Books are the carriers of civilization. Without books, history is silent, literature dumb, science crippled, thought and speculation at a standstill. They are engines of change, windows on the world, lighthouses erected in the sea of time.”

At this very noble and historic event, I must say that not only do these words ring true but they are a reminder, and indeed, a clarion call to us in Trinidad and Tobago to ensure that our literary industry is expanded and cultivated to ensure that our history no longer remains silent, our science no longer remains crippled and the winds of continue to blow our blessed nation on a path of progress and development.

We are a nation of great, internationally acclaimed literary talent.

The first imaginative writing was published in Trinidad in 1854, and to date, we boast of a rich collection of plays, poetry, short stories, novels and other pieces of writings, whose authors have in many instances been acclaimed internationally.

In an effort—a very complimentary and patriotic one If I may say so myself—to develop our literary industry, since 2010, NALIS has awarded over 100 first time authors in its First Time Authors Appreciation Programme, one developed to This recognise and encourage persons to write and get published.

Of course, tonight’s celebration is an Independence Golden Anniversary tribute to the masters who worked against the odds and built our country’s literary foundations.

It was conceptualised by NALIS to recognise authors of imaginative literature who have contributed significantly to the literary landscape of Trinidad and Tobago and by natural extension, its social, political and even economical development.

Thus, as our country celebrates the 50th year of Independence, NALIS seeks to celebrate and recognise nationals/citizens of Trinidad and Tobago who have, in the last five decades, received either international, regional or national recognition of any form for their literary endeavour, whose books have made it into the literary canon and whose literary works have reflected the local customs and culture of Trinidad and Tobago in the Post Colonial era and to raise appreciation for their writing.

They serve as inspiration to our country and for me, and people of my generation, we had the joy of seeing many of them develop first hand, knowing several of them as great contemporaries.

Included among these great writers are some of the more obvious ones, names everyone knows, like international literary giant, Sir Vidia Naipaul, who won the Nobel Prize for Literature in 2002, predominantly for his masterful work, A House for Mr. Biswas.
That work which earned Naipaul the reputation of being, to quote the late, great British writer, Sir Victor Sawdon Pritchett, in a Newsweek article 32 years ago, in 1980—and I quote:  “the greatest living writer in the English language.”

But more than that, it was really a masterful account of a very significant part of our nation’s history and cultural traditions, dealing in part with the legendary Capildeo family, which, as you may know, was one of our greatest scholastic, cultural and political dynasties of the last century.

Writers like Naipaul underscore the importance of literature to our historic revelation and our ultimate potential of greatness on not just a national scope, but an international one.

Awardees also include local and regional literary greats like Earl Lovelace, a man who was born in Toco and raised in Tobago, one of the first local and regional writers to celebrate our dialect in his writings, and Carnival culture its attendant  colourful rich heritage by his symbolic descriptive, dramatic fiction, encapsulated in his 1979 masterpiece, The Dragon Can’t Dance, a story about the efforts of a group of people to regain their culture and sense of community in poverty-ridden Trinidad.

Some literary greats like Samuel Selvon are also being awarded posthumously tonight, having passed away in 1994, the San Fernandian whose celebrated novel The Lonely Londoners is ground-breaking in its use of our national dialect, and a man who, I am proud to say, has the same alma mater as myself— Naparima College.

I remember reading with pride in my teenage years his very beloved novel A Brighter Sun (1952), which, again, encapsulating a great part of our history, details the construction of the Churchill-Roosevelt Highway in Trinidad through the eyes of young Indian worker Tiger.

I still remember one of my favourite jokes ever was told in this novel, when I the character Sookdeo, the known village scamp, attempted to sell his old, tired and sickly looking donkey to an unsuspecting villager.

I remember vividly laughing until I cried when I read that Sookdeo kept telling the villager “Him is a good donkey, him just no look good,” and the next morning, the man came bring the donkey to Sookdeo’s house, accusing him of being a liar, telling him:

“You never tell me the donkey blind.”

Sookdeo, in his defense, protested to say:
“How you mean, ent I tell you him no look good?”

These rich accounts of our true Trinidadian characteristics are an important aspect of our cultural heritage which need preserving more than ever today.

Other awardees in this list include a man who I have had the pleasure and honour of meeting, our country’s brilliant historian and author, Michael Anthony, whose classic Green Days By the River still inspires awe in many readers for its beautiful frank and realistic account of rural life in Trinidad so many decades ago, and I have to say that sometimes, “when I hear the dogs barking in the distance, I still wonder if it’s old man Girdharie walking up the road”.

Others include people who have spent their time and lives abroad, but who have impressed the international landscape with their works, like Rabindranath Maharaj the Canadian novelist, short story writer, and a founding editor of the literary journal Lichen whose novel The Amazing Absorbing Boy won the 2010 Trillium Book Award and the 2011 Toronto Book Award, while several of his books have been shortlisted for the Rogers Writers' Trust Fiction Prize, the Commonwealth Writers' Prize (Canada and Caribbean Region), and the Chapters/Books in Canada First Novel Award.

This literary scholar hails from rural Trinidad, George Village in Tableland, and incidentally, a lot of our great writers come from our rural areas.

The list also recognises great contemporary female writers like Dr. Elizabeth Nunez, who migrated to the USA after completing secondary schooling in Trinidad, and is co-founder of the National Black Writers Conference and directed the organization from 1986 to 2000, and is acclaimed for her great 2006 work, Prospero’s Daughter.

And of course, we have some of my contemporaries and colleagues from the University who are recognised tonight, like literary scholar Professor Kenneth Ramchand, who plays a very significant role in keeping the literary torch alive by teaching our young ones about its worth.

In many instances, the writings of a lot of these authors remain on our CXC lists and I recognise more than ever the need to have these texts and writing promoted in our primary schools in addition to our secondary schools.
NALIS, as you may know, was placed under my portfolio as Minister of Education in the June Cabinet reshuffle and I intend to ensure that they play a very important role in promoting our historic and current writers and literature in our schools, so our younger generations will never be lost to the rich and great works that we have spawned as a nation and continue to spawn.

It is time that we recognise as a country that a investing in the arts, especially our literature, is not only a brilliant strategy that diversifies the economy, promotes employment, gender equality and reduces crime as it allows our young people an opportunity to develop their creativity and make a career from it, but also a way of showcasing and promoting our history and cultural heritage for generations to come.

Tonight, it is the best promise I can make in the face of the recognition of such greatness and I want to close by simply offering my congratulations to all the awardees, and thank them for their great works, for their contributions to our souls and consciences as a nation, for their preservation of our heritage, history and development of our individual and collective sense of self pride and worth.

To you, the audience and the general public, I say may we always read on, read much, read happily and read diligently, for as the German philosopher, Goethe once truthfully said:

"The decline of literature indicates the decline of a nation,” and we must always aspire to be a nation of progress.

It is said that human beings do not live forever, but rather, we live less than the time it takes to blink an eye, if we measure our lives against eternity.

It may be asked therefore: “Of what value is there to a human life?”

It is therefore left to our literary heroes and writers current and future to ensure that that blink of an eye represents a quality that is immeasurable, simply by making it full of meaning, colour, and most importantly, everlasting.

May they always have that ability and may we as a nation always yearn for it, and recognise its worth.

God’s richest blessings to all.