Minister Dookeran Suggests Areas for Change to the ACS 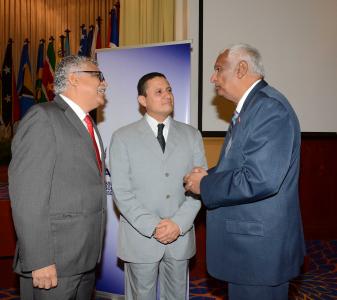 PORT OF SPAIN: The Honourable Winston Dookeran, Minister of Foreign Affairs urged the Association of Caribbean States to move from expectation to a different level of participation. This sentiment was expressed at the 17th Intersessional Preparatory Meeting of the Ministerial Council of the Association of Caribbean States (ACS) on 1st December, 2014 at the Radisson Hotel, Port of Spain.

During the welcome address, Minister Dookeran also suggested that consideration be given to identify ways to raise the expectation of the ACS in terms of its potential for development and economic change by focusing on the Blue Economy in the Caribbean Sea. He explained that the Blue Economy is the sustainable exploitation of the resources of the oceans particularly the living resources, fish and marine life. He further stated that the earlier beginnings of the dialogue that took place in the Caribbean Sea Commission, which is chaired by Costa Rica, should be used. Chair of the Ministerial Council of the ACS, His Excellency Carlos Raúl Morales Moscoso, Minister of Foreign Affairs of Guatemala, took the opportunity to welcome all Member States to the meeting and urged them to make decisions in a timely manner which will in turn allow the Secretariat to do its work efficiently.

Also addressing the meeting of the Ministerial Council was Secretary General of the Association of Caribbean States, His Excellency Alfonso Múnera. His Excellency thanked Minister Dookeran for his message which he said was a very important guide to the ACS. He further stated that “the ACS was conceived as an instrument or tool that can take CARICOM outside of CARICOM.” Secretary General Múnera pointed out that the “ACS had faced major difficulties in developing its full potential and centuries of differences cannot be made up overnight.” His Excellency also indicated that this dialogue was a major step forward and that they have an understanding of what the Caribbean States must do. He emphasised that “we need the understanding of Member States and assistance to move the thrust forward to make the Association more relevant.”


The agenda of the 17th Intersessional Preparatory Meeting of the Ministerial Council of the Association of Caribbean States focused on areas such as natural disasters, trade development and external economic relations, transport, sustainable tourism and special funding. The Ministerial Council comprises of Ministers of Foreign Affairs of the 25 Member States as well as Associate Members. It is the principal organ for policy-making and direction of the Association, and oversees the work of the Directorates in the areas of Trade and External Economic Relations; Sustainable Tourism; Natural Disaster Risk Reduction; Budget and Administration and the Caribbean Sea Commission.