Minister Cuffie receives report on the role of state media 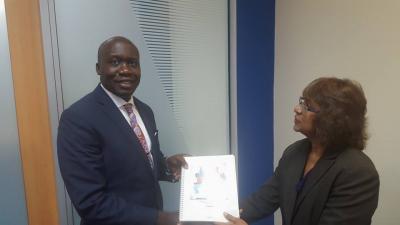 December 22, 2015: One of the first mandates of the recently-appointed Board of the Caribbean New Media Group/Government Information Services Limited (CNMG/GISL), given by line Minister, the Honourable Maxie Cuffie was to coordinate a public consultation on the role of state media in Trinidad and Tobago. The Board, which is chaired by Helen Drayton, completed this mandate and the public consultation was held from November 02 -18.

Following these public consultations, the Board prepared a report which was presented today, Friday December 18, to the Honourable Minister by Nylah Ali, Director, CNMG/GISL Board. This report titled “Toward Dynamic Public Service Media: Proposal on the way forward for CNMG and GISL” is expected to inform the direction, policy and legal structure of state owned media in Trinidad and Tobago.

The Minister intends to review the proposal, advise the Cabinet and subsequently inform the public of the subsequent steps.

From November 02-18, members of the public were given the opportunity to contribute to a national discussion on the role of state media via the Caribbean New Media Group’s various media channels including CTV’s Good Morning Trinidad and Tobago, TalkCity 91.1FM, Next 99.1FM, Sweet 100.1FM and CNMG's social media platforms. The opportunity was also provided for the public to attend and participate in four days of live discussions and engagement.