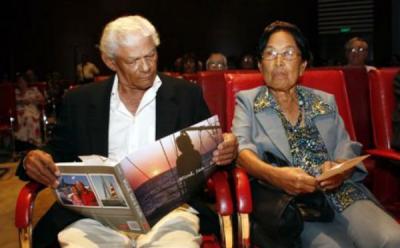 Caption: Renowned Trinbagonian Sailor Harold La Borde and wife, Kwailan La Borde at a 2010 launch of one of their books. (Photo courtesy newsday.co.tt)

June 13, 2016: It is with great sadness that I learned of the passing of Harold La Borde who, along with his wife Kwailan, were the first known nationals to circumnavigate the globe from 1969 to 1973. To many, Mr. La Borde was a legend; to others, he was a passionate, dedicated, disciplined patriot who taught himself how to be a sailor and about seamanship.

The story of the La Bordes and the passion, dedication and discipline which allowed them to pursue their dreams will always be memorable. In fact, Mr. Harold La Borde’s story should always be an example of what is required to fulfil one’s dreams.

It is my hope that as a result of his passing, his legacy will now be more actively sought in the many books he authored including his first book, An Ocean to Ourselves (1962), All Oceans Blue (1977), and Lonely Oceans South (1987). His autobiography which is in development with his wife, will be a treasured tale of his heroics on the sea, and will provide in-depth life lessons on the historic nature of his feats.

On behalf of the Government of Trinidad and Tobago, I extend my sincerest sympathies to Mrs. Kwailan La Borde and the entire La Borde family. Our country is poorer for his passing but still enriched by his motivational story and legacy.

Minister of Public Administration and Communications

Ministry of Public Administration and Communications