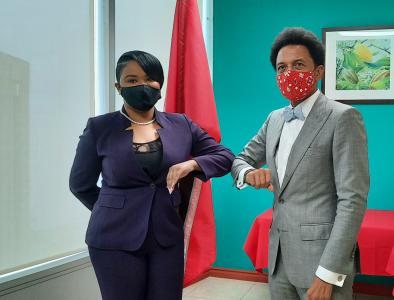 November 25, Port of Spain: Minister of Sport and Community Development, the Honourable Shamfa Cudjoe congratulates TTOC President, Brian Lewis, on his appointment as Chair of the esteemed Sport Integrity Global Alliance’s (SIGA) Standing Committee on Race, Gender, Diversity, and Inclusion in Sport. Lewis, who also serves as President of the Caribbean Association of National Olympic Committees (CANOC), will spearhead the diversity, equity, and inclusion initiatives of the world’s largest association of sporting governance and integrity.

In expressing her congratulations Minister Cudjoe said, “SIGA’s mandate is to safeguard the integrity of world of sports through advocacy and meaningful reforms. This independent body is supported by over 100 multi-industry stakeholders worldwide. To have our very own Brian Lewis steer SIGA’s Committee on Race, Gender, Diversity and Inclusion is simply momentous. His position will directly impact this country’s own efforts to eradicate divisive barriers in sport. There will be much learnings for our sporting administrators and athletes to reap.”

Minister Cudjoe further notes that Trinidad and Tobago is raising its voice on the diversity, equity and inclusion agenda. This weekend, the Special Olympics hosted a Virtual Charity Fundraiser to ensure that special athletes have yearlong support and are better incorporated into mainstream sporting activities. Accordingly, “News of Mr. Lewis’ appointment emboldens Trinidad and Tobago’s position on creating an equitable sporting environment for all.”