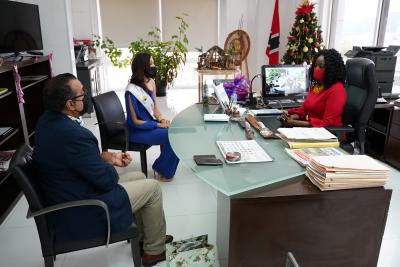 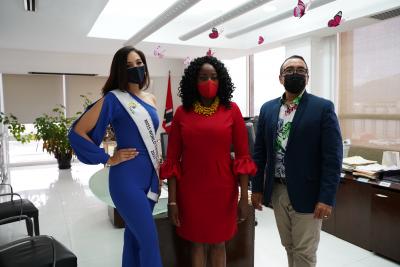 Ms Brandt will be representing the country at the Miss World Competition in Puerto Rico.

Earlier this year, the Ministry supported the Beauty with a Purpose segment, via sponsorship of trophies and also offered Sign Language courses to all the contestants. The charitable projects undertaken in this segment were consistent with the Ministry’s mandate of helping, empowering and transforming the lives of vulnerable citizens of Trinidad and Tobago. Both Ms. Brandt and Mr. Gopaul personally thanked Minister Cox for the support with the Beauty with a Purpose segment.

During the courtesy call, Ms. Brandt was able to expound on the work of her charity, ‘The Brandt Beauty Foundation’, which focuses on making a real difference in the lives of underprivileged girls in Trinidad and Tobago.

Discussions revolved around affairs of mutual interest including poverty eradication and the importance of food sustainability.

Minister Cox commended and congratulated Ms. Brandt on the work she has done thus far for the vulnerable sectors in society; particularly women and children, which forms a central part of the Ministry’s portfolio. She also expressed her confidence that Ms Brandt is already a shining example of what the Miss World pageant represents, and that she has already made Trinidad and Tobago proud.

The Minister extended best wishes to Ms Brandt on behalf of the Ministry and by extension, the Government of Trinidad and Tobago.