Minister Cox meets with TTT Board 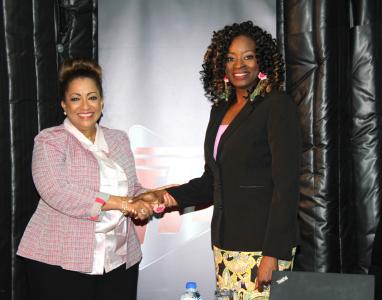 Minister of Communications Senator the Honourable Donna Cox today met with the board of TTT for the first time since her appointment.

She told the meeting which included the acting CEO Lisa Wickham that the Ministry stands ready to provide support for the company but it is important that TTT differentiate themselves from other media houses and show that it is making strides to fulfil the Government’s mandate to position the station as a platform for local content.

“We spoke about TTT being able to showcase the work of the Government. But not just the Government, also what is positive in the country,” Minister Cox said.

The station, Minister Cox said, must find ways to reduce costs and must be ready to implement new ideas with the resources the state has made available for its operations.

She said the state-owned television company must provide the Government and public sector with opportunities to showcase how its policies and initiatives positively impact the lives of citizens.

It cannot be business as usual and “we have to think outside of the box,” she said.

Chairman of the Board Lisa Agard gave the commitment that the team she leads is working to ensure TTT raises revenue and cut costs. She said she also recognises that the station must be a single source of truth for Government’s efforts and policies.

TTT was formally launched on 30 August 2018 which marked the official change over from its previous brand, CNMG.