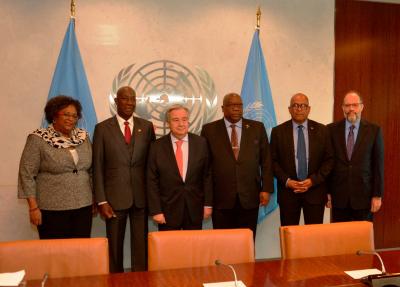 Trinidad is 6.8 miles off the coast of the Bolivarian Republic of Venezuela (Venezuela). It is closer to Trinidad than even Tobago.

Trinidad and Tobago’s foreign policy has always been one of non-intervention and non-interference in the internal affairs of other sovereign states.

In 2017, it became apparent that there were difficulties in Venezuela and there were issues between the Venezuelan Government and the Opposition that threatened the economic, political and social climate in Venezuela and this was having negative effects on Trinidad and Tobago and other Caribbean Community (CARICOM) states.

In May 2017 whilst on an official visit to Chile, the Prime Minister, Dr. the Hon. Keith Rowley, raised the issue of Venezuela with the then President of Chile, H.E. Michele Bachelet, and suggested that attempts be made to promote dialogue and negotiations between the Venezuelan Government and Opposition. The Prime Minister offered for Trinidad and Tobago to host any such meeting between the parties. The concept of encouraging dialogue and mediation between the parties in Venezuela, provided that they were prepared to participate in such a process was discussed. A request was made to Chile to assist in mobilising other states to encourage this course of action.

In July 2017, the CARICOM Heads of Government discussed Venezuela and reaffirmed their guiding principles of adherence to the rule of law, respect for human rights and democracy, as well as for the fundamental principles of non-intervention and non-interference in the internal affairs of states. They called for all parties to commit to engage in renewed dialogue and negotiation leading to a comprehensive political agreement with established time tables and concrete actions. CARICOM Heads of Government offered their good offices to facilitate this dialogue.

In 2017 Trinidad and Tobago offered to host, and to assist in any way whatsoever, for the Venezuelan parties to have dialogue.

On January 24, 2019 an emergency meeting of the Heads of CARICOM was held. CARICOM reaffirmed adherence to the guiding principles of non-interference and non-intervention in the affairs of states, respect for sovereignty, adherence to the rule of law, and respect for human rights and democracy and called for peaceful resolution through meaningful dialogue and diplomacy. Heads of Government called on external forces to refrain from doing anything to destabilize the situation and underscored the need to step back from the brink and called on all actors, internal and external, to avoid actions which would escalate an already explosive situation to the detriment of the people of Venezuela and which could have far-reaching negative consequences for the wider region.

A CARICOM delegation went to the UN to meet with the Secretary General of the UN and other representatives in New York, USA on January 28 and 29, 2019.

The meeting with the UN Secretary General H.E. Antonio Guterres took place on January 28, 2019. The UN Secretary General extended an offer of “good offices” of the UN, circumstances permitting, to facilitate dialogue and negotiation between the parties. The CARICOM Delegation also held discussions with a number of relevant countries/organisations including the USA, Canada, Brazil, South Africa, the European Union (EU), the African Union, Uruguay, Russia, China, Mexico, Australia and Nicaragua and advocated the encouragement and promotion of dialogue between the parties towards a peaceful resolution of the internal affairs of Venezuela and to abide by the recognised polices of non-interference and non-intervention.

On January 31, 2019 the European Union (EU) announced the creation of an International Contact Group of European and Latin American countries (ICG) to help chart a peaceful end to Venezuela’s political crisis within 90 days.

On February 6, 2019 CARICOM met with Mexico and Uruguay and the discussions resulted in the “Montevideo Mechanism” agreeing that the most appropriate way to address the complex situation that prevails in Venezuela is through dialogue for a negotiation, from a position of respect for International Law and Human Rights. Diplomacy is preferred over other alternatives, as it is the only way to achieve sustainable, legitimate and effective peace and stability. The Montevideo Mechanism was offered to the Venezuelan actors as a peaceful and democratic alternative that prefers dialogue and peace, with the aim to create all necessary conditions for an inclusive, comprehensive and lasting solution, to bring the disputing parties closer together, to avoid conflict and violence, it is guided by the principles of non-intervention, legal equality of the States, peaceful solution and respect for human rights and self-determination. The Mechanism reiterated concern about the serious humanitarian situation and respectfully exhorted all parties to guarantee the validity of the Human Rights and the freedoms established in the UN Charter, subscribed to by Venezuela.

On February 7, 2019 Uruguay met with the IGC, having participated with Mexico and CARICOM in the formulation of the Montevideo Mechanism. As a result of this meeting, the ICG, having issued its earlier ultimatum of elections and resolution within 90 days revised its position and no longer placed conditions on the calling of elections, they also expressed commitment to mobilize further assistance in areas of need and coordinate its delivery in liaison with the Joint UNHCR/IOM Special Representative, Mr. Eduardo Stein. This recognition of a major role for the UN is in keeping with the CARICOM’s position. The ICG, decided to proceed with the necessary contacts with relevant Venezuelan actors as well as with regional and international partners with the aim to: i) establish the necessary guarantees for a credible electoral process, within the earliest timeframe possible; and ii) enable the urgent delivery of assistance in accordance with international humanitarian principles (using the UNHCR).

The current situation is that our doors remain open, Trinidad and Tobago/ CARICOM, to the Venezuelan parties to peacefully resolve their differences, in a process that the Venezuelan people will own, and to assist them in deciding their own fate whilst providing humanitarian aid in accordance with recognised UN principles.

In the meantime, Trinidad and Tobago continues to acknowledge the presence of Venezuelan citizens in our country. We are taking the necessary steps to ensure that they receive assistance as we develop policies and procedures to officially recognise and treat with their presence here.