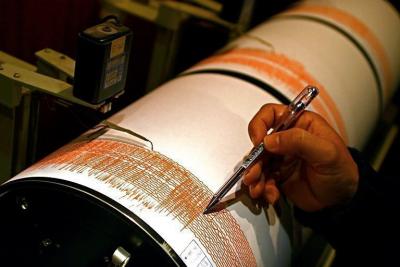 December 8, 2016: Arima North Secondary School, one of seven schools participating in the Seismology in Schools (SIS) programme, has captured seismic readings at their school after Tuesday evening’s 6.2 magnitude earthquake, and the 4.4 and 4.9 aftershocks that followed.

Using the seismometer installed in each school by NIHERST in collaboration with the University of the West Indies Seismic Research Centre (UWI SRC) and the Ministry of Education, as well as the initiators of the programme – The British Geological Survey, the University of Leicester, the Imperial College London and Durham, students utilised jAmaSeis software to record and access real-time earthquake waveform data.

Along with the other schools in the programme (ASJA Girls’ College San Fernando, Couva East Secondary School, Iere High School, Lakshmi Girls’ High School, Signal Hill Secondary School and St. Stephen’s College), students are today keenly interrogating the seismic data following this large earthquake. In processing the data, students are determining the characteristics of their seismograms including time of occurrence, distance from the epicenter to the station, magnitude and location. Along with the UWI SRC, students are comparing their findings and discussing the implications of this tectonic activity. The data collected by the schools’ seismometers are available in real time an international seismology network known as the Incorporated Research Institutions for Seismology (IRIS).

Earthquakes capture the attention of students and the public alike. While they can frighten, they should also inspire us to explore the Earth. This programme allows students to undertake the role of a seismologist within their own classroom. This is especially valuable in a country like Trinidad and Tobago which lies above active fault lines and where, contrary to popular belief, earthquakes and not hurricanes are likely to be the largest natural disaster that we face.

The media is invited to interview a representative from the UWI SRC, a NIHERST Sesmology in Schools Project Coordinator and/or teachers/students from participating schools on Tuesday night's activity. Please contact Mrs. Joanne Chin Sang of the International Projects Department at 622-7505 Ext 3305/3319 / joanne.chinsang@niherst.gov.tt or the Marketing Dept. at 758-3381 /marketing@niherst.gov.tt to arrange these phone or in-person conversations.

About Seismology in Schools

Launched in Trinidad and Tobago in 2014, the programme is an adaptation of the successful Seismology in Schools project developed in the UK and adopted by over 500 schools around the world. NIHERST has partnered with the Ministry of Education and the UWI Seismic Research Centre (SRC), as well as the institutions at the helm of Seismology in Schools in the UK - University of Leicester, University of Durham, Imperial College and the British Geological Survey (BGS). The programme introduces the science of geophysics to students from forms three to six, and give them hands-on experience of seismology. They will get a taste of how scientists work and see the physics, geography and mathematics principles being taught in the curricula come alive in real world situations. For more information on this programme go to http://www.niherst.gov.tt/projects/seismology-in-schools.html or see Seismology in Schools – Trinidad and Tobago on Facebook

The National Institute of Higher Education Research Science and Technology (NIHERST) is a statutory body established by an Act of Parliament in 1984 to promote science, technology and higher education in Trinidad and Tobago consistent with national development goals. Its current work focuses on the development of a more diversified, knowledge-driven economy, based on the ingenuity of our people and their ability to create, adapt and use science and technology for wealth generation and national development. Many of its programmes aim to strengthen the innovative, creative and entrepreneurial capabilities of the general population. NIHERST is also engaged in research, such as in foresight and innovation, to support economic diversification; promoting innovation and the commercialisation of technology in priority sectors; and building global partnerships.

The Seismic Research Centre (SRC)(formerly the Seismic Research Unit) of the University of the West Indies grew out of a Colonial Development and Welfare (CDW) project established in 1952 with the objective of monitoring volcanic activity in the Lesser Antilles and of providing a trained group of scientists in the West Indies who could react quickly to volcanic emergencies. Presently, the centre comprises a network of over 50 stations and is the authoritative source for information on the status of earthquake and volcanic activity in the English-speaking Eastern Caribbean.

About Ministry of Education

The MoE Trinidad and Tobago’s vision is to be a high performing, dynamic and vibrant organisation, responsive to the needs of stakeholders and which works collaboratively, efficiently and effectively to educate and develop an intelligent, versatile, productive and well-rounded child. As such the MOE maintains active involvement in any initiative to ensure the safety and wellbeing of students, compatibility with the curriculum, and appropriate transfer of knowledge and technologies for sustained impact and equitable access to all schools.

In this SIS initiative the MoE plays a key role in monitoring, evaluating and improving the programme in the long term. The MOE also provides technical advice to guide the infusion of the concepts and skills developed during teacher training into effective teaching and learning strategies as well as ensure alignment with national and regional education policies and curricular goals.