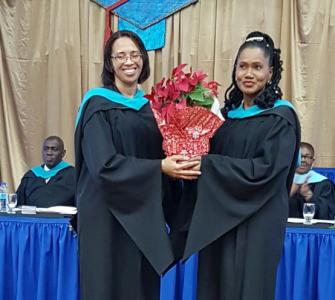 As Minister with responsibility for the CCLCS, Minister Baptiste-Primus also addressed the Board of Governors reminding them of their role in evaluating the College’s performance by measuring its outputs and outcomes to enhance the experience for its students. The Minister gave the assurance to work with the Board to reposition the College as a pioneer tertiary institution of its kind.

The Minister congratulated the Graduates on their success noting that she recognised the challenges they faced and overcame to graduate. Minister Baptiste-Primus also gave special recognition to the mature students and mothers of the graduating class and commended them on their personal sacrifice.

Economist and former Lecturer at the College Dr. Ralph Henry in his Feature Address straddled both the historical perspective and the potential future of the College and championed the Graduates to be ambassadors that will restore the clout to the College.