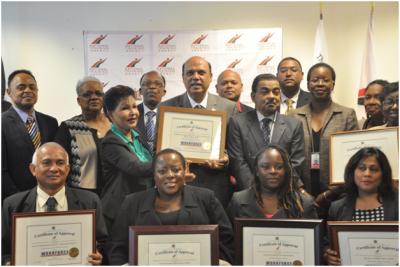 October 28, 2014: Tertiary Education and Skills Training Minister, Fazal Karim at the National Training Agency’s (NTA) launch of the Workforce Assessment Centres (WACs) today (Monday 27th October, 2014) stated that they have expanded the centres to the private sector. He referred to the move as “testimonial” as twelve private organisations out of thirteen received their approval certification to function as WACs. The launch took place at Ministry of Tertiary Education and Skills Training’s (MTEST) Conference Room, Level 18 International Waterfront Centre, Tower C, 1A Wrightson Road, Port of Spain. This is part of developing the national workforce through private sector partnerships.

Karim gave a historical background of the WAC initiative which dates back to the National Energy Skills Centre (NESC) in 2011 which was held under the patronage of the Prime Minister of the Republic of Trinidad & Tobago, the Honourable, Mrs. Kamla Persad-Bissessar. The purpose of the WACs as stated by the Minister, are to “certify the uncertified, increase the creation of job opportunities, ensure that citizens are certified according to their aptitudes and attitudes.” Additionally, it is to recognise those persons who may not have been formally recognised in the system.

Minister Karim remarked that the Prior Learning Assessment and Recognition (PLAR) has always been a part of our job culture. He exemplified this through the analogy of a young man in early times seeking employment in the electrical field as having prior learning as a worker, being assessed upon an interview through a test of skills and decision, then being recognised by receiving his badge to start work.

GATE is “cutting out abuses to the system through increasing its accountability” restated  Minister Karim and has advised persons “not to do two first degrees”. He also announced that “MIC, NESC and YTEPP has awarded 5,674 persons with over 15,000 unit awards.” This figure among other institutions in the Technical Vocational Education Training Sector (TVET) the Minister explained will increase the current participation rate that now stands at 65.23 percent.

He called on the National Training Agency to consider “issuing the approved WACs to also be approved as investors”. Karim went a step further by informing the gathering that it is not simply approval, but an “investment in people, skills and brains.” Current millennia trends include “increased globalisation and increased localisation” which are driven by human capital, “the key ingredient to jobs”, he added.

Beginning January 2015, Minister Karim has proposed to further recognise WACs with a full kit which encompasses a tool kit set, a coverall and a cap that reads “I am Workforce certified”. In his closing remarks Karim reminded all present and WAC reps to “extend services to everywhere you can. We must be all embracing.”