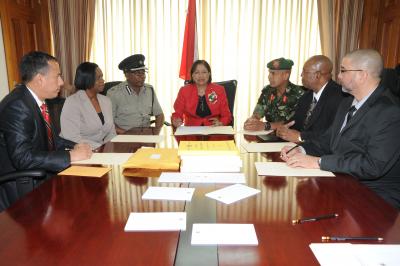 Caption: Prime Minister Kamla Persad-Bissessar SC, centre, chairs the session of the National Security Council at the Office of the Prime Minister, St Clair. Seated at the table (from left) are Minister of National Security, the Honourable Gary Griffith, Deputy Police Commissioner, Ann Marie Alleyne, Acting Commissioner of Police, Stephen Williams, Chief of Defence Staff, Major General Ken Maharaj, Assistant Commissioner (Crime) Glen Hackett and Deputy Director of NSOC, Allan Araujo
December 23, 2013: A meeting of the National Security Council  (NSC) was held today under the Chairmanship of the Honourable Kamla Persad-Bissessar SC, Prime Minister of Trinidad and Tobago, at the Office of the Prime Minister, St Clair.
Among those in attendance were Minister of National Security, Senator Gary Griffith, acting Commissioner of Police, Stephen Williams, Deputy Commissioner Ann Marie Alleyne, Assistant Commissioner (Crime) Glen Hackett, Chief of Defence Staff, Major General Ken Maharaj, and Deputy Director of the National Security Operations Centre (NSOC), Allan Araujo.
Among the issues discussed included;
1) Security measures for the Christmas Holidays.
2) Additional security measures for energy installations on land and at sea.
It was decided that the Police Service and Defence Force would work together to ensure the safety and security of the citizens of Trinidad and Tobago during
the festive season. Acknowledging there has been an increase in homicides in December, the National Security Council (NSC) said every additional resource would be deployed during the Christmas season.
There will be increased mobile patrols along the main roads and highways. Foot patrols will be increased in the major towns. The Highway Patrol and Rapid Response Unit (RRU) will be monitoring the highways, as statistics show that during the festive season, there has been an increase in road fatalities.
Statistics have shown that the majority of road deaths have been caused by speed, tiredness and alcohol, or a combination of all.
Following last week's oil spills in South Trinidad, a decision was taken at today's meeting to increase security around installations in the energy sector, both on land and at sea.
The NSC got an update on the oil spill, and while an investigation is being undertaken by Petrotrin, Government has decided to protect its facilities within the energy sector. Stricter security measures will be in place at all energy installations, and access won't be as easy as before.
In this regard, the Honourable Prime Minister has incidcated an interest in seeing the areas affected by the oil spills. A tour is being planned to take the Prime Minister and other officials through the affected areas on Tuesday.
###
Office of the Prime Minister
Minister Cudjoe extends condolences on the passing of Drifting Icon, Kerry Phillip
EBC stages “mock polling station”
Transforming the MOE: Expanding and Improving Service Delivery
Trinidad and Tobago COVID-19 (Novel Coronavirus) Update # 322
Trinidad and Tobago COVID-19 (Novel Coronavirus) Update # 321