Incoming Agriculture Minister’s Message to Staff: “I am here to work with all of you 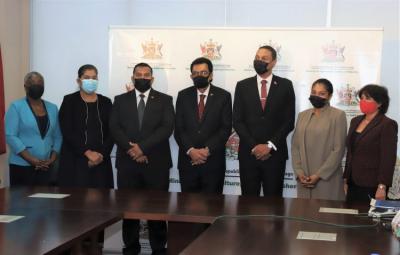 “Once God’s presence is here, everything else will fall into place.” Such was the sentiment expressed by the incoming Minister of Agriculture, Land and Fisheries, Senator the Honourable Kazim Hosein, as he addressed the executive and senior management staff of the Ministry of Agriculture, Land and Fisheries (MALF), at a Ministerial Handover and Prayer Invocation Ceremony which took place earlier today (Tuesday 22nd March, 2022) at MALF’s Head Office in Chaguanas.

In thanking God for the opportunity to serve in his new position, Minister Hosein said he remained resolute in giving it his very best and will be approaching each task with a renewed sense of purpose. He further acknowledged that his role was no more significant than any of the Ministry’s staff with whom he signaled a commitment to work closely with for the benefit of all stakeholders. The Minister added: “I got along and worked with everyone at RDLG and I intend to do the same at MALF. I grew up with love and I extend that wherever I may go.”

Minister Hosein also took the opportunity to remind both of his senatorial colleagues that as policy makers and politicians, it was imperative that they respect the role of the Ministry’s “distinguished career public servants”, whose support was critical in advancing the agriculture sector’s objectives in the interests of all. He praised the contributions of his predecessor, Mr. Rambharat, whom he identified as a close friend and someone whose knowledge and guidance he will be calling upon, going forward.

Both Ministers Singh and De Freitas were in high praise of the former Minister of Agriculture, Land and Fisheries as well as the incumbent, each sharing an account of their personal and professional relationships with them during their brief remarks.

Also invited to address the ceremony was former Agriculture Minister Clarence Rambharat, who took the opportunity to reflect on the many opportunities he was privileged to have throughout his career and thanked the Ministry’s personnel for all the support given to him during his tenure. He further stated that he was not “fired” from the Cabinet but indicted that his resignation was a well-considered one, which took into account an examination of his professional and personal life, and the ways in which he may otherwise be of optimal service to the people of Trinidad and Tobago in the future.