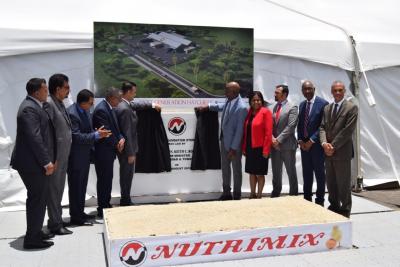 Dr the Honourable Keith Rowley, Prime Minister of Trinidad and Tobago and Mr. Shameer Ronnie Mohammed, Director of the Nutrimix unveil the foundation stone for the Nutrimix’s Next Generation Hatchery

Dr the Honourable Keith Rowley, Prime Minister of Trinidad and Tobago in delivering the Feature Address at the Sod Turning Ceremony for Nutrimix’s Next Generation Hatchery on Wednesday 15 August, 2018, lauded the Nutrimix Group for their major undertaking in agriculture and reaffirmed the commitment of the Government to partner with the private sector to support business activity which develops and grows the economy in alignment with the Administration's vision. Describing the Nutrimix investment as a significant one from the private sector, Prime Minister Rowley said "the launch for the construction of this hatchery represents the model the government wishes to pursue aggressively for the development of a stronger agricultural sector".

The new state-of-the art facility which will be located at the Corner of Rivulet and Captain Watson Roads, Brechin Castle, Couva, will be the most modern of its kind in the wider Caribbean and represents the single largest investment in Agriculture in Trinidad and Tobago over the last 5 years. It will boost local employment; some 100 persons will be employed during the 18 month period of its construction and 50 persons when it is operational. The first phase of the facility will have the capacity for approximately 1.3 million eggs with provisions for an additional 1.7million eggs.

Also addressing the audience at the Ceremony, Senator the Honourable Paula Gopee-Scoon, Minister of Trade and Industry said, “Investment is the lifeblood of any economy and it signals the inherent commitment and confidence of the private sector in the robustness of Trinidad and Tobago’s economy, despite its more recent challenges”.

In congratulating the Nutrimix Group of Companies on achieving this milestone, Minister Gopee-Scoon indicated that “this investment will bring benefits beyond the Nutrimix Group as it will also strengthen and build capacity in the local poultry industry and the wider manufacturing and agriculture value chains through collaboration with suppliers and customers”. Noting that the imports of chicken accounted for over ninety per cent (90%) of total imports of poultry which comprise of nineteen thousand (19,000) tonnes of chicken valued at one hundred twenty two million TT dollars, (TT $122million), the Trade Minister asserted that “building capacity in the local poultry industry, will contribute towards the reduction of our exorbitant food import bill”.

Minister Gopee-Scoon also reaffirmed the Government’s ongoing commitment to current and prospective investors; to partner, and to provide robust and well-coordinated investment facilitation and encouraged businesses to place themselves in a position to capitalize on available opportunities provided by the Government.

Mr Shameer Ronnie Mohammed, Director of the Nutrimix Group of Companies in his Address stated that the Nutrimix Group has dared to use these economic conditions as an energizing springboard to be innovative. He said “We have proven that the application of modern thinking and creativity makes it possible to succeed in such conditions”.