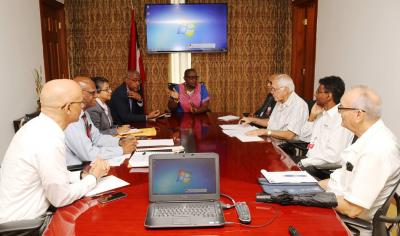 Another meeting was held today (Friday 03 August, 2018) with representatives of the Joint Consultative Council for the Construction Industry (JCC) at the Office of the Prime Minister, St Clair. This as Government continues to work with the JCC to ascertain and verify the sum owed to its members. The JCC is the recognised umbrella organisation for five of the professional bodies associated with the construction sector.

Prime Minister Dr the Honourable Keith Rowley appointed Minister of Planning and Development, the Honourable Camille Robinson-Regis to chair today’s meeting as he was unable to be attend.

In September 2017, during the Government’s national pre-budget forum ‘Spotlight on the Economy’, contractors asserted that Government owed them an estimated $4.5 billion. As such, Prime Minister Rowley invited the JCC to submit documentation to support the claim.

Subsequently, in January 2018 the Prime Minister announced that he will chair a Ministerial Committee for the Construction Industry. The committee includes relevant Government Ministers and representatives from the various professional bodies which form the JCC. One area of focus for the committee is the settlement of legitimate outstanding arrears to contractors.

Today, several months after they received the request from the Government, the JCC was able to submit documentation to substantiate claims totalling $676 million. The Government will now undertake a verification process with a view to settling its commitments as part of its overall management of Trinidad and Tobago’s economy.