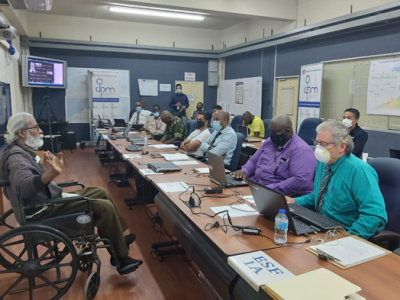 Cabinet on June 25, 2020 agreed to designate the month of May as National Disaster Prevention and Preparedness Month (NDPPM) annually. Due to the challenges presented by the COVID-19 pandemic, however, Government declared June as NDPPM for this year only. This declaration coincides with the Atlantic Hurricane Season, which extends from June 1-November 30, the period of greatest disaster loss to the nation. The NDPPM aligns with Government’s Vision 2030 goals and the United Nations Sendai Framework for Disaster Risk Reduction, the latter being ratified by Government in January 2020.

While disaster prevention and preparedness are year-round activities, bringing focus to these issues in May, will serve to promote a heightened sense of awareness, preparation and readiness, before the commencement of the Atlantic Hurricane Season.

The Minister of National Security, the Honourable Stuart Young, in envisioning this innovation, sees it as a strategic step towards building a whole-of-society culture of disaster readiness and resilience. Towards this goal, the NDPPM initiative will place emphasis on preparing individuals, families, communities, the public and private sectors and international bodies that provide support to Trinidad and Tobago.

The Office of Disaster Preparedness and Management (ODPM) has been designated as the national coordinating agency for operationalizing the NDPPM. The ODPM will provide oversight to a multi-sectoral committee of national agencies that has been appointed to plan and execute the NDPPM annually. The Committee is also mandated to maintain national focus on disaster prevention and preparedness throughout the year.

In anticipation of Government’s decision on the NDPPM and in its ongoing efforts towards national disaster readiness and risk reduction, the ODPM during June staged a series of Strategy Planning and Disaster Preparedness exercises with key public, private and international organisations under the theme, Be Disaster Prepared for Stability, Strength and Growth.

The final exercise in the series concluded on July 01, 2020 at the National Emergency Operations Centre in Tacarigua, where over 37 agencies were practised in preparedness, response and recovery operations. These agencies represented various sectors such as Energy; Transportation; Air and Sea Ports; Public Works; Government Ministries; the Media; and Regional and International Institutions.

The Minister of National Security is confident that this new initiative will strengthen the nation’s disaster management capabilities and intensify the implementation of holistic disaster risk reduction measures, leading to a safer society and less annual losses and damage.