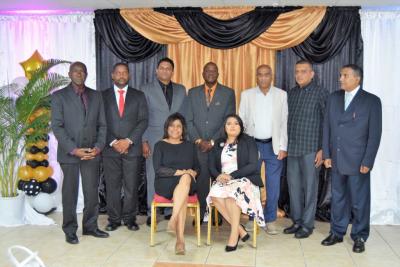 Members of the executive of the newly formed Gasparillo Chamber of Commerce launched on Saturday 8 September, 2018 were commended by the Minister of Trade and Industry, Senator the Honourable Paula Gopee-Scoon for the successful realisation of their collective vision. Senator Gopee-Scoon stated that the event signalled heightened business activity in Gasparillo which would benefit the wider community. She added that the creation of the new Chamber of Commerce was very encouraging because it pointed to the solidarity among the businesses, the hope that exists and the ability to organize and act on those shared values for a brighter, more prosperous future for the neighbouring communities.

Noting that a significant percentage of firms in Gasparillo and in Trinidad and Tobago are Small and Medium Enterprises (SMEs), Minister Gopee-Scoon affirmed that “These SMEs remain the backbone of our economy and the sheer number, diversity and dynamism of these businesses position them as unequalled social and economic forces. You are therefore the drivers of growth and sustainable development in our country”. The Trade and Industry Minister indicated that there are several initiatives being executed by the Ministry and its State Agencies to create new opportunities in the non-energy sector for entrepreneurs to innovate, expand and export. Minster Gopee-Scoon encouraged the membership to partner with the Government to ensure that their work is impactful and benefits businesses, the Gasparillo community and the country as a whole.

Newly appointed President of the Gasparillo Chamber of Commerce, Mr Anil Ranjit, in his inaugural address, highlighted of the objectives of the current executive which included creating opportunities for young entrepreneurs and addressing some other issues affecting Gasparillo and environs. He envisioned the Chamber’s work as transformative as proposed by the Minister of Trade and Industry.

Economist Dr Roger Hosein, Senior Lecturer and the Coordinator of the Trade and Economic Development Unit at the Department of Economics, University of the West Indies, who also spoke at the launch identified projects which the Chamber could initiate to impact the community of Gasparillo. He indicated that the Chamber and similar institutions had a major role to play as the future of the country relied on the development and expansion of the non energy sector.