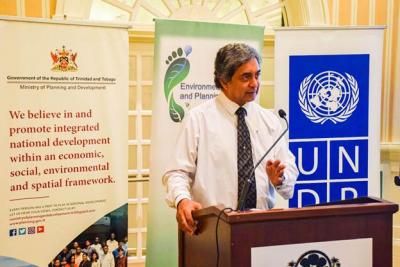 Signing and Ratifying the International Solar Alliance (ISA) Framework Agreement opens the doors for Trinidad and Tobago to have fully solar-powered facilities, much like neighbouring Barbados, where in 2017 Republic Bank opened their first fully solar powered facility. Putting into action the ISA, propels the nation towards a more environmentally and economically friendly business atmosphere.

Furthermore, with the 2020 budget proposed increase in tax credits for solar powered water heating equipment, it is almost undeniable that there will be an increase in residential homes taking full advantage of this budget initiative. With these pending increases it will be expected that key stakeholders, such as energy providers, educational institutions and research developers would need resources to strengthen new innovations in the sector.

In light of this and the Government’s steadfast goal of placing the environment at the centre of social and economic development, Cabinet agreed to have the Government of Trinidad and Tobago ratify and become a signatory to the ISA Framework Agreement. By Cabinet decision it was also agreed that the Ministry of Planning and Development be designated the National Focal Point for the ISA. In so doing the country now has the potential to afford opportunities for economic diversification through international co-operation in deploying solar technologies and creating green jobs; develop programmes and projects and access to funding from the ISA and other supporting partners within the sector.

Participating in the ISA would also support the implementation of the country’s National Determined Contribution (NDC) under the Paris Agreement to United Nation’s Framework Convention on Climate Change (UNFCCC). Wherein, the country is committed to reduce cumulative greenhouse gas emissions in Transportation, industry and power generation sector by 15% by December 31, 2030. Further it brings into sight the goal of achieving 10% renewable energy by 2021.

ISA affords Trinidad and Tobago the prospect of generating solar policies for the implementation of solar energies technology and innovations, research and project development, education curriculum expansion and training while offering a platform for member countries to share valuable best practices in the industry.

In keeping with the Government’s commitment to sign and ratify the ISA Framework Agreement; the 2020 budget has fast passed energy efficiency. The proposed increase on solar water heating equipment tax credit from 25.0 % to 100.0 % of the cost of the Solar Water Heating Equipment up to a maximum of $10,000. This initiative will benefit approximately 12,000 households and will take effect from January 1 2020.

ISA signing and ratification is in keeping with Theme V of the National Development Strategy 2016-2030: Vision 2030 and would provide the opportunity for Trinidad and Tobago to achieve the national objective of improved energy efficiency by 2030.