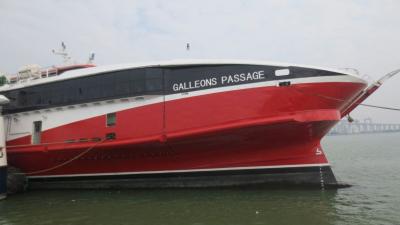 The Galleons Passage is scheduled to depart China tomorrow, Tuesday February 27, 2018 and to arrive in Trinidad and Tobago on April 28, 2018, making stops in Hong Kong, Hawaii, Panama and Cuba.

The Minister of Finance Colm Imbert disclosed in a series of tweets that the Galleons Passage will stop at the world class Damex Shipyard in Cuba to do some enhancements, including additional canopies and additional toilets for passengers on the upper sundeck and canopies for the vehicle deck. One hundred (100) of the seven hundred (700) seats are to be upgraded as well.

An international crew arrived in Nansha, China, from Lithuania and Latvia, to start the process of getting the Galleons Passage fuelled up and started up, and loaded with supplies and ocean class safety equipment in preparation for departure from China to Trinidad and Tobago.

The Galleons Passage structure has been assessed in accordance with the Lloyds Register Rules & Regulations for Special Service Craft with an operating wave height limitation of  4.0m (13 feet) in open waters and a maximum wave height of 6.6m (22 feet).

Galleons Passage is classified for operation in significant wave heights of up to 4.5m (15 ft) and maximum wave heights of 6.7m (22 ft) and near gale force winds of 7 Pa. With its bulbous bow, it can easily make the journey between Port of Spain and Scarborough in comfort.

The Galleons Passage is capable of higher speeds than 22 knots which will allow a sprint to places of refuge in a storm en route from China to Port of Spain, via Honolulu, Hawaii, through the Panama Canal, with a stop at the Damex Shipyard, Imbert tweeted.