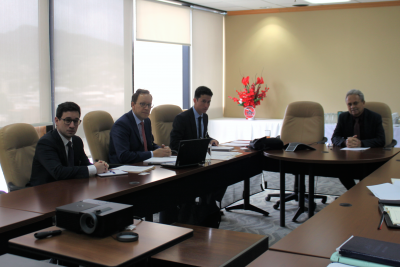 Mr. Charles Seville, Senior Director and Co-Head of the Americas, Mr. Carlos Morales, Director and Mr. Daniel Pulido-Mendez, Analyst represented the Agency. Also in attendance were the Permanent Secretaries, the Director of Budgets and Assistant Directors of the Economic Management Division of the Ministry of Finance.

During their visit, Fitch is expected to meet with other institutions in the public and private sectors. Real sector developments; fiscal and monetary policy; balance of payments; debt financing; exchange rate developments; the identification of potential vulnerabilities; and medium-term projections for key economic variables will be discussed during the consultations. Additionally, discussions will also include policies that affect the country’s macroeconomic performance such as diversification policy, oil and gas tax reform, investment promotion and trade.

At the end of the Mission, the Fitch delegation is expected to present its preliminary views on the outlook for the economy, and the major macroeconomic variables and indicators which inform its credit opinion.