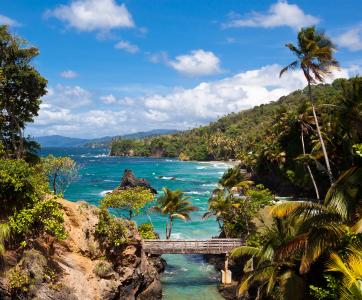 In May 2019, as part of its strategic plan to attract more productions to T&T, and to increase locations visibility, FilmTT hosted a Familiarisation Tour for three influential location managers from the US and UK, to share the potential regarding locations and infrastructure on both islands. Combined with an international advertising campaign, and several other tactics to broaden the company’s network, this campaign continues the momentum of that project.

The Make a Scene campaign will see consistent, weekly promotion of the geographic, financial and logistical benefits of shooting in Trinidad and Tobago. As the country’s Film Commission, FilmTT offers services such as the Production Expenditure Rebate Programme; up to 35% cash back on qualifying services, plus 20% cash back for hiring local labour. FilmTT also hosts an online Production Directory for finding cast and crew, as well as a searchable Location Database, and can arrange entry into the country for cast, crew and equipment.

From 1970 to 2019, more than 86 local and international features have been produced in Trinidad and Tobago. In addition, from 2005-2019, the country has seen a steady stream of more than 440 productions coming primarily from the US and the UK, that produce episodes or scenes based on topics that are specific to this country. Recent examples include: CNN’s Parts Unknown with Anthony Bourdain; HBO’s Sesame Street; BBC1’s Blue Planet; BBC’s Imagine series; Warner Bros. Studio’s digital promo for feature film The Nun; 2 episodes of VH1’s Love and Hip Hop Atlanta Season 8; 4 episodes of new VH1 reality series Girls Cruise; 2 episodes of ITV’s Ainsley’s Caribbean Kitchen from the UK; as well as as-yet-unreleased productions from the BBC, Netflix and CBS.

General Manager of FilmTT, Ms. Nneka Luke, shared, “We at FilmTT and CreativeTT are excited by the potential of Trinidad and Tobago’s screen-based industry to not only generate important indigenous productions for local and international consumption, but also to attract a steady stream of international productions of all forms, including feature-length narrative and documentary films, television series, commercials, and short-form content such as music videos. Apart from the rebate, T&T has a lot to offer the international industry, including trained and capable production crew, lowest cost of doing business in the region, tops in the region for infrastructure, direct access to North and South America, and so much more.”