FAO/UN hands over Cassava Row Planter to Ministry of Agriculture 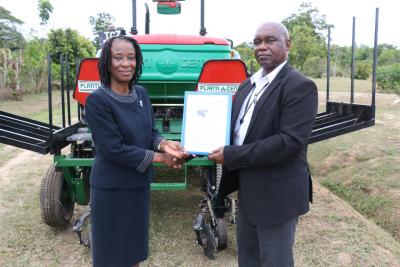 A USD$16,000 “Cassava Row Planter” was handed over to the Ministry of Agriculture, Land and Fisheries, (MALF), by the Food and Agriculture Organisation of the United Nations (FAO/UN) on Tuesday 27th August, 2019.

The brief official ceremony, took place at the compound of the Ministry’s Research Division, Carnoi North Bank Road, Centeno; as the “Sustainable Approaches to Agro processing and Value Chain Development of Root Crops in the Caribbean” has officially ended and the farm equipment for planting and harvesting of cassava tubers provided by the FAO was officially handed over to the Ministry.

The project was implemented in, Antigua and Barbuda, Dominica, St Kitts & Nevis, St Lucia, Suriname and Trinidad and Tobago. In Trinidad, the Project was implemented in partnership with the Ministry of Agriculture, Lands and Fisheries (MALF) having signed an MOU in 2016, under a Government Co-operative Programme (GCP); and was guided by a local Project Steering Committee comprising the Ministry, NAMDEVCO and FAO personnel.

The Project focused on the development of the following areas of the cassava industry:

Over the Project’s duration, notable achievements were the Cassava Buyers and Sellers Forum in Bunsee Trace, Penal, an Agro-processors Food Safety Workshop, a Field Study Tour to Tobago by the Project Steering Committee including farmers and the provision of farm equipment for planting and harvesting of cassava tubers for on-farm demonstration.

Ms Lydia Jacobs, Permanent Secretary, MALF, was present to officially receive the equipment from the FAO’s representative to Trinidad and Tobago and Suriname, Mr Ruben Robertson.
In her brief address, PS Jacobs urged the staff present, to be passionate about the products and services of the Ministry, as they work to ensure that the Ministry’s objectives are met. She also praised the FAO’s collaboration with the ministry and other stakeholders for the successful venture.

Mr Ruben Robertson, the FAO’s representative, also commended the initiative, and underscored the importance of working together to contribute to food security and sustainability.

The facilitators over the project’s duration, included: Ms. Nadia Ramtahal and Theresa Rosemond, both Agricultural Officers, Sharon Jones of the FAO and several other staff members of the Ministry of Agriculture, Land and Fisheries. The project was co-ordinated by Agricultural Officer I of the Research Division, Mrs. Mynie Ramlal – Ousman, with the support from Ms Albada Beekham, Acting Director of the Research Division.