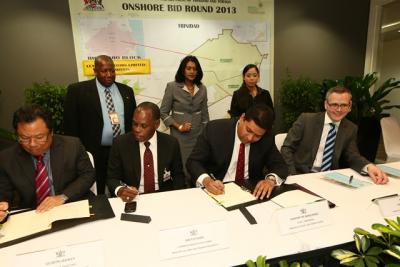 November 2, 2014: Minister of Energy & Energy Affairs, Senator the Honourable  Kevin Ramnarine on October 31, 2014 signed three Exploration and Production (E&P) licenses for land based petroleum operations  with Range Resources Limited, Primera Oil and Gas Limited (Touchstone Exploration Inc.) and Lease Operators Limited. Petrotrin has a 20% stake in all three licenses. This signing comes out of the 2013 Onshore Competitive  Bid Round. Minister Ramnarine hailed the signing as one of the most significant achievements of the Ministry in the last three years.  Signing on behalf of Petrotrin was its Chairman Lindsay Gillette whilst Nick Beattie, Michael Loewen and Daniel Brash signed  on behalf of Range Resources Limited,  Primera Oil and Gas Limited, and  Lease Operators Limited respectively.

These three licenses provide for  investment of $US 55 million in support of the  the combined minimum work obligations (MWO’s) and could result in a possible maximum expenditure of $US 945 million in the development phase.  It also means the creation of new jobs and the stimulation of significant economic activity. The Minister noted that the signing of the licenses by three companies from Australia (Range Resources Limited), Canada (Primera Oil and Gas) and Trinidad and Tobago (Lease Operators Limited) is an affirmation  of strong investor confidence in the economy. In the event of commercial discoveries, the Government would also benefit from taxes and royalties while Petrotrin would realise  new sources of indigenous crude oil for its refinery.

The signing of these licenses is the  culmination of three years of collaborative work by officers of  several State agencies including the Ministry Of Energy and Energy Affairs, Petrotrin, the Office of the Attorney General and the Office of the Commissioner of State Lands. The three licenses will result in the drilling of 12 exploration wells, the acquisition of 3D and 2D seismic and the reprocessing of existing 3D seismic. The  licensees also include  commitments to funding technical equipment bonuses, scholarships and training

The 2013 Onshore Bid Round was the first dedicated land based bid round in 15 Years and the award of these three licenses is part of the wider strategy by the Ministry of Energy and Energy Affairs to increase the production of crude oil.

The total area under license in these three blocks is 64,000 hectares and the Ministry of Energy and Energy Affairs estimates that the three blocks have potential of over 800 million barrels of oil.

Ministry of Energy and Energy Affairs