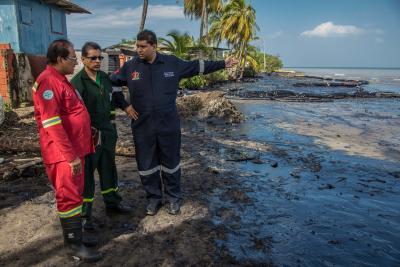 Caption: Minister of Energy and Energy Affairs, the Honourable Kevin Ramnarine surveys the oil spill damages in La Brea. he is joined by the President of Petrotrin, Khalid Hassanali and aother Petritrin Official
December 22, 2013: The Ministry of Energy and Energy Affairs (MEEA) wishes to advise that based on an assessment of oil spill clean-up activities along the coastal areas including Carrat Shed, Station Bay, Patience, Granville, Fullaton and Cedros beaches, the Minister of Energy and Energy Affairs, Senator the Honourable Kevin Ramnarine has instructed that the National Oil Spill Contingency Plan (NOSCP) be activated to the Tier 3 Level (the highest level).
This means that resources from overseas will be brought in to address this spill incident. The National Controller of the NOSCP is the Permanent Secretary at the MEEA, Mr. Selwyn Lashley.
Petrotrin has membership with a Tier 3 Oil Spill Response Organization, Oil Spill Response Limited (OSRL), which is based in Fort Lauderdale, Florida, USA. It is expected that representatives from this organization will be in the country tomorrow. Activation of the NOSCP to the Tier 3 level is expected to assist in expediting clean-up efforts that are currently ongoing. Oil Spill Response Limited is one of the world's largest oil spill response companies.
Background
 On December 17, 2013, a weld leak was discovered on the No. 10 Sea Line at the Petrotrin, Pointe-a-Pierre Port during fuel oil bunkers loading operations for the barge Marabella.
 Later that same day a gasket on a 16” line of Riser Platform 5 in Trinmar’s Main Field leaked and oil spilled into the sea.
Government of the Republic of Trinidad and Tobago
 On December 18, Petrotrin received reports of oil at the Coffee Beach/Carrat Shed Beach areas in La Brea, affecting the beach and fishing vessels.
 The National Oil Spill Contingency Plan (NOSCP) was triggered to the Tier Two Level and an Incident Command Team, comprising the Environmental Management Authority (EMA), the Ministry of Energy and Energy Affairs (MEEA), the Institute of Marine Affairs (IMA), the Coast
Guard and the Occupational Safety and Health Administration (OSHA), began its assessment of the spill and clean-up activities.
 On December 19, an oil leak was discovered in the area of Platform 17 in Petrotrin’s Trinmar Operations East Field.
 On December 21, Trinity Oil and Gas reported that several valves on wellsite tanks were discovered opened at its Petrotrin WD-2 Lease Operatorship Block in Rancho Quemado.
 The spills that occurred at Pointe-a-Pierre, Riser Platform 5 and Platform 17 in Petrotrin’s Trinmar Operations were successfully contained and the clean-up exercise is continuing. On December 19, clean-up activities at the Port at Pointe-a-Pierre were completed and terminated.
 On December 22, the Minister of Energy triggered the NOSCP at the Tier Three Level to bring in overseas resources.
# # #
Ministry of Energy and Energy Affairs
Prime Minister co-chairs US/Caribbean Energy Security Action Committee
Trinidad and Tobago COVID-19 (Novel Coronavirus) Update #1130
Minister Robinson-Regis advises citizens to beware of scammers
Cabinet Approves the Addition of the Monkeypox Virus to the list of Dangerous Infectious Disease in Trinidad and Tobago
Trade Ministry disappointed with actions of retailers