Deed of Lease and Certificates of Comfort to Point Fortin residents 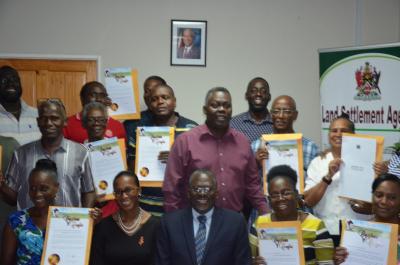 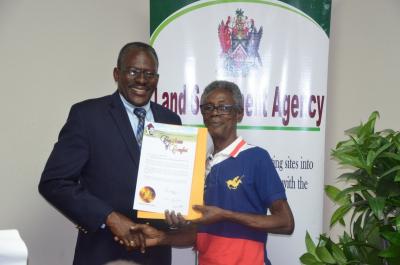 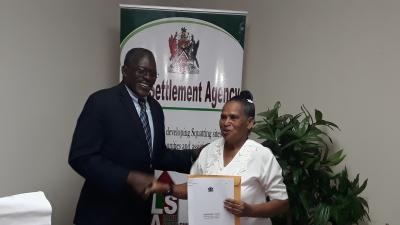 Ms. Shaffiran Mc Burnie of Springle Street, Point Fortin was ecstatic to receive her Deed of Lease from Housing Minister, the Honourable Major General (Retired) Edmund Dillon at a distribution ceremony held at the Office of the Member of Parliament for Point Fortin on Tuesday 19 November, 2019.

Minister Dillon, who is also the Member of Parliament for Point Fortin was pleased to present Ms. Mc Burnie with her Deed of Lease, since it highlights this Administration’s commitment to issuing Deeds of Lease to deserving applicants under the State Land (Regularisation of Tenure) Act 25 of 1998. Ms. Mc Burnie said she was, “very, very happy to receive her Deed of Lease and was thankful to Minister Dillon and the LSA for completing the process and giving the Deed to her.”

Nineteen other families from Point Fortin and La Brea were also in attendance to receive their Certificates of Comfort (CoC), which were issued by the Land Settlement Agency.  This event marks the first step in the process towards regularization of tenure under the Squatter Regularization Programme.  Persons were advised  that the CoC is not a Deed and as such cannot be sold, assigned or transferred to anyone else; nor is it a license to grab more land by extending the existing boundaries.

The CoC holder is eligible to advance to the next step once they have satisfied all the requirements set out under the Act. The next stage is the issuance of a Statutory Lease which gives an interest in the land, thus providing the holder with a maximum of thirty (30) years to pay off for the occupied lands, which is sold at twenty-five percent (25%) its market value.

Once the CoC holder has made full payment of the occupied lands under the Statutory Lease arrangement, they will be awarded a marketable Deed of Lease, which is the final step in the regularization process. The assigned Deed of Lease which is for a period of 199 years conveys ownership of the land to eligible squatters and all the benefits of land ownership under the Constitution such as land tenure, legitimate home ownership and the creation of generational wealth.

Since September 2015, this administration has issued over seven hundred (700) Certificates of Comfort, and approximately one hundred and thirty one (131) Statutory Leases to deserving applicants under the Squatter Regularisation Programme.

Minister Edmund Dillon told those gathered, including his parliamentary colleague and Member of Parliament for La Brea, the Honourable Nicole Olivierre and His Worship the Mayor of Point Fortin, Councillor Abdon Mason, that the distribution of these instruments is in keeping with government’s policy, to provide title to qualifying persons occupying State Lands prior to 1998 and who applied on or before October 28, 2000 for the Certificate of Comfort. He also indicated that the Ministry of Housing and Urban Development through the Land Settlement Agency will be issuing more Statutory Leases and Deeds of Lease to eligible CoC holders in the near future.

He further stated that, “this government was about putting people first as it considers them to be the country’s greatest asset and as such every policy, programme and initiative was designed with people in mind with the ultimate aim to improve their standard of living.”