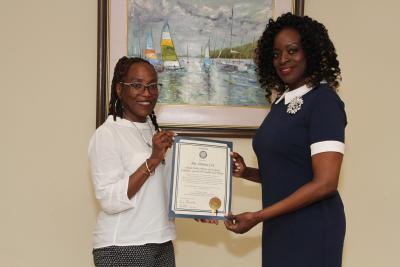 The office of the Brooklyn District Attorney today honoured the work and contribution of Minister of Communications Senator the Honourable Donna Cox.

Caribbean Liaison for the office, Karen Chambers presented Minister Cox with a citation for her work and contribution at the Consulate General of the Republic of Trinidad and Tobago in New York.

Minister Cox was the Consul, Public Affairs & Culture at the Consulate General in New York prior to taking up her appointment as Minister of Communications on 22 July 2019.

The citation was presented on behalf of the office of Brooklyn District Attorney Eric Gonzalez. Chambers said her office wanted to thank Minister Cox.

“What stood out most about Donna Cox’s work is how she relates to the nationals and the caring person that she is, the DA (District Attorney) recognised that, so he wanted to honour her when he heard she was leaving,” explained Chambers.

Chambers who has Caribbean roots - her father is the late Chief Magistrate Roland Crawford - said the office felt they had lost a valuable resource and wanted to show they appreciated the Minister’s time and efforts.

She explained that nationals always have problems, and although part of her office’s mandate is to prosecute, her role as Caribbean Liaison is also to help and provide free advice.

She said Minister Cox was particularly caring and helpful in this regard.

The citation read in part: “As the Kings Country District Attorney, I commend you for your extraordinary service to Brooklyn, your commitment to leadership development, volunteer service, philanthropic giving and civic duty exemplifies what it is to be a leader…”

Minster Cox is the first Trinidad and Tobago national to receive a citation of this kind from the Brooklyn District Attorney.