Couva Children's Hospital expected to be complete by March 2015 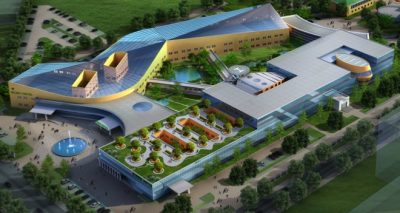 Couva Children's Hospital expected to be complete by March 2015

The Couva Children’s Hospital will stand on a 60-acre site on lands from the former Caroni (1975) Limited. The estimated cost of construction is US$150 million (TT$ 975M). Funding for the institution is through a Government-to-Government arrangement with China. The Memorandum of Agreement (MOU) for the project has already been signed. The expected completion date for the hospital is March 2015.

The Children’s Hospital will include a Multi-Training Centre for Medicine, Nursing and Pharmacology. It will be a self-contained, centralized medical facility equipped with the most modern and high-end medical equipment.

When completed it will have:

There will also be a housing facility to serve as a hotel, guesthouse or residence, as well as a shopping mall. The institution will be an integral part of the development of Health Care Tourism in Trinidad & Tobago.

The project is a Design-Finance-Construct model and UDeCOTT will supervise the construction. The Honourable Kamla Persad-Bissessar, MP, S.C., Prime Minister of Trinidad and Tobago turned the sod for the hospital on March 02, 2012.

In a speech at the event, she said the hospital is “very close to my heart”, calling it a dream ”which I have cherished for quite some time”. She called the sod turning one of the most important events during her tenure as Prime Minister.

“We are not about erecting white elephants willy nilly, we are not about creating edifices of political egos, monuments of pretentious aggrandisement at the expense of ignoring the plight of the people. We are carefully planning the development of Trinidad and Tobago that encompasses the entire country, north, south, east and west, urban and rural. And we are about being people centred.”

She added she was inaugurating the project for “every child that passes through this facility in years to come, for every medical professional who is trained here and gains employment here, for every hurt soothed, for every parent who doesn’t have to suffer the pain of being unable to afford the urgent medical care for their child, for so many wonderful, heart-warming moments and reasons.”