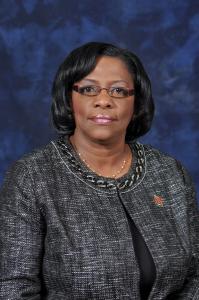 January 9, 2014: The bereaved family of murder victims, Krishna and Radha Ramdeen of Cedros, were yesterday visited by Local Government Minister, Senator the Honourable Marlene Coudray, who noted that the incident brought back the memory of her own loss.

Courday, whose daughter, Michelle was murdered in Jamaica in 2012, said she identified with the grief of the family and friends of the murdered couple.

"I went on behalf of the party and the Prime Minister,”  noted Coudray.

The Ramdeens, who were found chopped to death on Tuesday, are expected to be cremated on Friday, January 10 following a funeral service at their home in Fullerton, Cedros.

Krishna, 62, and Radha, 57, were found dead by their son Ravi, 27, when he went to help them operate their mini-mart and bar, called White Diamond.

The couple are parents of four adult children and grandparents of eight.