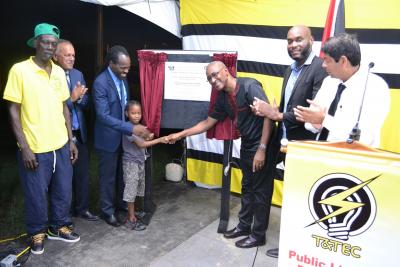 Minister of Public Utilities, Senator the Honourable Robert Le Hunte (right-centre), along with the Member of Parliament for Laventille West, the Honourable Fitzgerald Hinds (left-centre) and other officials unveil the commemorative plaque.

A concerted effort by residents of Collins Road and Upper St. Francois Valley Road in Belmont has led to the commissioning of lights on the Enforcers Recreation Ground. The ceremony, which was hosted by T&TEC, was held on Friday, 7th September 2018 and attended by residents of the area, along with Member of Parliament for Laventille West, the Honourable Fitzgerald Hinds, and Minister of Public Utilities, Senator the Honourable Robert Le Hunte.

The Enforcers Recreation Facility started as a self-help project by a community group comprising the residents of Collins Street which was formed some 15 years ago.

Representation on behalf of the residents to have the facility illuminated was made by the Honourable Fitzgerald Hinds, and actioned by Minister Le Hunte.

Addressing the commissioning ceremony, Minister Le Hunte told residents he was particularly excited about launching this particular project since it demonstrated their willingness to become active participants in enhancing and improving their community life.

Minister Le Hunte noted that the installation of the lights at the Enforcers Ground meant that residents could have longer hours for exercise and other recreational and community activities. He said that some of the positive effects could be a decrease in delinquent activity among the youth, as well as the adoption of a healthy lifestyle by residents of all ages. He urged them, however, to use the lights wisely since they came at a cost to the country.

Minister Hinds, himself a former minister of Public Utilities, also urged residents to conserve electricity by turning off the lights when they are not in use.

Also speaking at the illumination ceremony was T&TEC’s Chairman Keith Sirju. He said the installation of the twelve 1500 –watt floodlights at the Enforcers Ground facility demonstrated T&TEC’s commitment to enhancing the quality of life for all citizens of Trinidad and Tobago.

Since it started the Public Lighting Programme some thirteen years ago, T&TEC has illuminated some 390 parks and recreational spaces throughout the country.

Minister Hinds revealed that similar projects were also planned for Pump road and Plaisance Road in the area.

Following the commissioning of the lights, two football games were held in honour of former local government councillor, Darryl Rajpaul, who passed away last year.