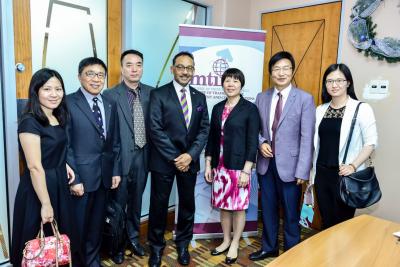 The visiting delegation was led by His Excellency Huang Xinyuan, Ambassador of the People’s Republic of China to Trinidad and Tobago; accompanied by Ms. Ying Lui and Ms. Zhitao Guo of the Chinese Embassy.

The primary purpose of the meeting was to discuss current projects funded by the Government of the People’s Republic of China.  Ms. Xiamin stated that ‘we come to your beautiful country to learn more about the country, to conduct on-site inspection on the various projects funded by us; and to learn more about future cooperation.’  She noted that the visiting team was ‘quite impressed’ by two projects in particular, the Couva Children’s Hospital and the Sports Facility.  Further noting that ‘we are quite satisfied with the implementation of the current projects and are committed to future cooperation with your country’.

The Acting Finance Minister told the delegation that ‘the Government is focused on people centred development throughout the country’, and has engaged in a programme of developmental works which ‘allows us to open up new economic spaces’ for the benefit of all our citizens.  He thanked the Ambassador and representatives of the China EXIMBank for its confidence in the people of Trinidad and Tobago and for their ongoing support of the country’s economic development.