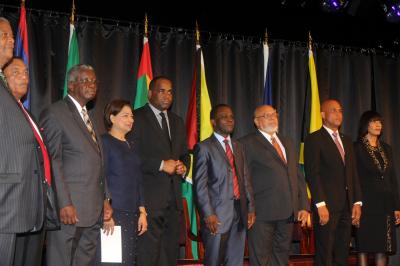 The 34th Regular Meeting of the Conference of Heads of Government of the Caribbean Community kicked off with its gala Opening Ceremony at the Diplomatic Centre in Port of Spain this evening.

Each of the speakers at the ceremony, CARICOM Secretary General, Irwin LaRocue, President of the Republic of Haiti and outgoing Caricom Chairperson, Michel Martelly; Prime Minister of the Bahamas, Perry G. Christie; Prime Minister of Barbados, Freundel J. Stuart and Prime Minister of Grenada, Keith Mitchell, took the opportunity to note that July 3 marks the 40th anniversary of the Georgetown Accord and the integration of the organisation.

Each speaker traced Caricom's history from the Commonwealth Caribbean making the move from the 1965 free trade area to Dickenson Bay, CARIFTA, to the Community and Common Market of Chaguaramas, CARICOM and the 1973 Georgetown Accord had been transformed into the Treaty of Chaguaramas.

The Heads of State who addressed the opening also looked at the achievements and failures of the last forty years and pointed optimistically to a future for the region with LaRoque noting that Caribbean youths had a Tweeter rally, where 74,000 views were expressed and the region's youth said they could not see a future without CARICOM.

When he addressed the audience, which included government Ministers from across the region and private sector stakeholders, Prime Minister of Grenada Keith Mitchell noted that transportation, sports integration and ICT were important topics which needed to be addressed by the Heads at this meeting.

He lamented that it was cheaper for CARICOM citizens to travel to New York or Miami than it was to travel from Castries in Grenada to Kingston in Jamaica and that when goods from one island got to the other it was either too expensive because of the cost of shipping it or it had gone stale or perished because of the time it took to get there.

Mitchell added that more needed to be done to ensure that there was more regional connectivity not only transportation wise but also via broad band and other technological services. He added that a sporting academy for all the regions youth was a necessary next step especially in the light of recent achievements at the Olympics in London by Usain Bolt, Kirani James and Keshorn Walcott.

Prime Minister Kamla Persad Bissessar, as the incoming Chairperson of CARICOM, responded to all the matters raised by Mitchell and his counterparts from Barbados, Haiti and the Bahamas.

The Prime Minister noted that she understood Christie's concerns that the needs of children with disabilities and special needs should be addressed regionally and she took a step further saying that it should be addressed internationally as well. She added that she also had a concern since her granddaughter is autistic.

Prime Minister Persad Bissessar also noted CARICOM's achievements with the Caribbean Public Health Agency that was launched on Tuesday and the fact that most of the CARICOM heads had attended the University of the West Indies, at Mona in Jamaica, Cave Hill in Barbados or St. Augustine in Trinidad and that UWI was one of CARICOM's greatest achievements.

Persad Bissessar urged the Heads to move to include the Dominican Republic and the French and Dutch islands of the Caribbean in the organisation.

She noted that such an expansion of the grouping would see an increase in markets as well as adding unity and cohesion to the region's foreign policy voice.