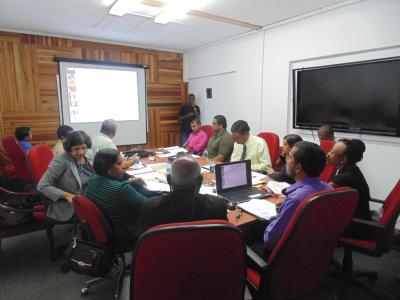 Caption: Stakeholders provide invaluable contributions at the Consultation hosted at CARDI’s Head Office in Trinidad. (Photo Courtesy: Caribbean Agricultural Research and Development Institute)
July 22, 2014:
As part of the process of developing its Medium Term Plan (MTP) 2014-2016, the Caribbean Agricultural Research and Development Institute (CARDI) hosted a series of National Consultations in its member countries during the period of 15-18 July 2014. Grenada’s Consultation held on 17 July at the Produce Chemist Lab, St George’s; whilst the Trinidad and Tobago Unit hosted its National Consultation on 18 July 2014 at CARDI’s Headquarters, University Campus, St Augustine; with concurrent National Consultations being held in Barbados, Belize and Jamaica.
The objective of these consultations was to obtain comments, receive feedback and ensure that stakeholders are part of the development of the Institute’s MTP.  Ansari Hosein, Head of Unit (Ag.), CARDI Trinidad and Tobago Unit said of the Consultation ‘I am very pleased with the outcome of the consultation. It was well attended by representatives of many stakeholder organisations. It was great to see stakeholders being very passionate when expressing their views suggesting that they are very much interested in CARDI's position and wants the Institute to continue to move in a positive and relevant direction over the next medium term. The discussion was very vibrant and we received valuable inputs and comments which will be considered when preparing the final version of our MTP 2014-2016 for submission to our Board of Directors’.
Greg Rawlins, Representative, Inter-American Institute for Cooperation on Agriculture (IICA), Trinidad, was among the attendees.  He said ‘it allows institutions and stakeholders to understand what CARDI has planned and to be able to make an input … it is a very good idea as it allows for CARDI to get feedback from institutions that are also involved in agriculture development’.  For the organisation, IICA’s participation in the Consultation allows for them to better understand what CARDI has planned and what IICA has planned ‘works together, in terms of having a harmonious relationship’.
In keeping with two of the three pillars that underpin CARDI’s actions i.e. bottom up/client led and working together, the Institute will share the philosophy and contents of its draft MTP with major stakeholders and consider their views towards preparation of the final draft for submission to its Board of Directors and subsequently, Board of Governors.
Also, through this consultative process, the final version of the MTP should be in synergy with the programmes of its member countries and relevant to the respective national vision. Organizations attending the sessions included representatives from financial and tertiary educational institutions, agricultural societies, agriculture Ministries, farmers groups, Food and Agriculture Organization (FAO) of the United Nations, Inter-American Institute for Co-operation on Agriculture (IICA).
CARDI … presenting the ‘facts on agriculture and research for development’.
END
For further information, please contact:
CARDI’s Office
Tel: 868-645-1205
Trinidad and Tobago COVID-19 (Novel Coronavirus) Update #1119
Trinidad and Tobago COVID-19 (Novel Coronavirus) Update #1118
Trinidad and Tobago COVID-19 (Novel Coronavirus) Update #1117
Prime Minister Rowley’s Statement at the IX Summit of the Americas
Trinidad and Tobago COVID-19 (Novel Coronavirus) Update #1116