From African Swine Fever to Ebola: Can we win the battle to control infectious disease? 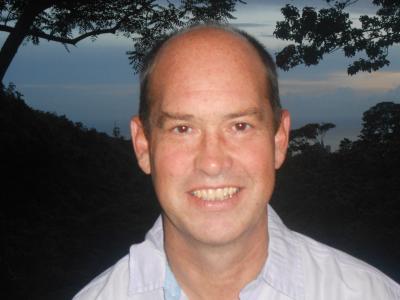 Caption: Professor Christopher Oura, Professor of Veterinary Virology, School of Veterinary Medicine, Faculty of Medical Sciences at The UWI St. Augustine. Professor Oura will present his inaugural lecture as Professor on the containment and control of diseases on November 20, 2014. (Photo courtesy the UWI)

November 17, 2014: ST. AUGUSTINE, Trinidad and Tobago – Apparently, before the AIDS virus raised its ugly head there was a groundswell of opinion amongst many scientists and disease experts that society had turned the corner, and humans were winning the battle to control viruses. According to Professor Christopher Oura, Professor of Veterinary Virology at the School of Veterinary Medicine, Faculty of Medical Sciences at The UWI St. Augustine, sadly, now it is known that they were very wrong. In taking a closer look at the armies of pathogens: antibiotic resistant bacteria, parasites such as malaria, Theileria and viruses such as avian / swine influenza, HIV, SARS, Chikungunya, Dengue, Bluetongue, and of course Ebola that have bombarded humans and animals in recent decades, it has become evident that some diseases are easier to contain and control than others. Professor Oura aims to assess the key issues behind this as he presents his inaugural lecture as Professor on November 20.

Calling on examples from research in which he has been directly involved, Professor Oura will describe why some pathogens present so much more of a challenge than others to control. He notes that many diverse factors are involved, including the nature, variability and transmissibility of the pathogen itself, how the host responds to being infected with the pathogen, whether there are wildlife reservoirs of infection and whether there is money in the control process for the pharmaceutical industries. He added, “Sadly, pathogens affecting humans and animals in developing countries are often ignored until they are seen as a risk to the ‘developed’ world. In my presentation I will describe some ‘lessons learnt’ (or in some cases not learnt) from successful control and eradication campaigns which I have been involved with in my career to date”. He will also reflect on the current Ebola virus outbreak in the context of risk to Trinidad and Tobago.

Oura, who was appointed to the rank of Professor at The UWI in 2013, is a qualified Veterinary Surgeon and has considerable research experience over many years working with vector-borne viral and protozoal diseases including bluetongue, African horse sickness, African swine fever, tropical theileriosis and East Coast fever.  He has worked in many countries around the world including Zimbabwe, South Africa, Uganda, Kenya, Mexico and the UK.

After completing his PhD on the immunology of African swine fever virus, he successfully secured two consecutive Wellcome Trust funded 3-year fellowships, the first based at Glasgow University in the UK and the second based in the University of Makerere, Kampala, Uganda. Having completed these fellowships, Oura returned to the UK where he spent the next 8 years at the world famous Pirbright Institute. He spent two years as Head of the Division of Epidemiology and one year as Head of Pirbright Laboratory, before returning to a more scientific role in charge of the OIE, FAO, EC and UK national reference laboratory for Bluetongue, African Horse sickness, African Swine fever, Rinderpest, Peste de Petits Ruminants and Capripoxviruses.

To date, the main emphasis of his work had been to collect baseline data on which pathogens are impacting the food producing animals of Trinidad and Tobago. He has secured funding from The UWI-Trinidad and Tobago Research and Development Impact Fund to look for viruses in wild birds, domestic poultry and pigs. The Professor has also developed a strong interest in ‘One Health’ and is the project leader of a recently funded EC project entitled ‘One Health One Caribbean One Love’. This project is in the process of rolling out the ‘One Health’ concept, of following a multidisciplinary approach to addressing global health issues, across the Caribbean region.

These Professorial Inaugural lectures aim to showcase the research of The UWI’s recently appointed or promoted Professors for members of the wider community and are free and open to the public.