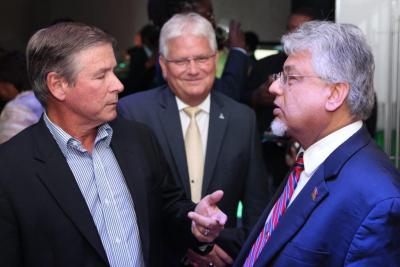 Caption: Minister of Planning and Sustainable Development, Senator the Honourable Dr. Bhoendradatt Tewarie (right), chats with Chairman of the Council for Competitiveness and innovation (CCI) at the i2i 2014 Launch, Mr. Richard Lewis, while Council Member, Mr. Nicholas Galt looks on. (Photo Courtesy: Ministry of Planning and Sustainable Development)
August 28, 2014:
Forty–two (42) applicants have been selected as winners of the 2014 idea to innovation (i2i) programme. These winners which comprise individuals, project teams, and companies, were selected from 493 submissions and will be awarded grants ranging from $75,000 to $200,000 to take their ideas to proof of concept, in one year. These grants which total TT$ 3.75 million will be funded by the Government of Trinidad and Tobago through its $10 million Innovation Financing Facility, a resource which was established to support entrepreneurial initiatives which have the potential to contribute to economic growth.
The i2i program was launched by the Council for Competiveness and Innovation (CCI) of the Ministry of Planning and Sustainable Development in 2012. It was established with the aim of fostering sustainable development through innovation by providing an opportunity for potential entrepreneurs and inventors to submit proposals for innovative ideas and receive the support which will allow them to turn these ideas into businesses, if these ideas are selected. i2i encourages innovation in seven strategic areas: energy, food sustainability, culture and creative industries, maritime, tourism, financial services, and Information and Communication Technology (ICT). The program is now in its third year and has provided grants of over ten million dollars to 103 winners over the past two years.
The 2014 i2i competition was launched on May 1, 2014 and ended on June 13, 2014. During this six week period, a nationwide communications campaign was executed throughout the country to create awareness of the programme and encourage innovators and entrepreneurs to participate in the competition. This campaign encouraged persons to discover the ‘untapped capital’ that exists within them and to contribute to a thriving national economy through participation in impactful innovative actions
Subsequent to the end of the competition, all submissions were evaluated by an Independent Pre-Screening Committee and Evaluation Panel comprising a mix of professionals drawn from both the public and private sectors. The evaluations were conducted over a period of two months and submissions were scored based on the criteria outlined in the program. Equitability was ensured through the omission of participants’ names and the use of a digital system to track ideas/concepts, and to tabulate and rank them. The size of grants was then ascribed based on activities outlined in the work plans of the selected applicants.
The 2014 i2i submissions which have been selected are categorized as follows: Manufacturing and Manufacturing Related - 10, Services - 13, Creative Industries - 7, ICT - 7, Alternative/Remedial Energy and Energy Efficiency -2, Environment (clean technologies, eco-related activities) – 2, and Agro-industrial Processing - 1. Some of these ideas/projects include: eliminating the problems of the development of cracks and other deformities on metal through the use of a metal sinking sheet, alleviating pain caused by arthritis through a hand massager which overrides pain sensation with touch sensation, improving the efficiency of greenhouses through the use of a desiccant cooling system, and assisting visually impaired individuals through the creation of a mobile product which uses a range of sensors, GPS, cameras, and microprocessors in order to help them navigate and avoid obstacles.
The 2014 i2i winners will be formally recognized at an award ceremony on September 10, 2014 at the IMAX Theatre. The winners are: Faiyet Mohammed; Arshad Mohammed, Leanda Bidaisee, Carima Ali,  Melissa Sankar, and Ornella Mano;  Emeka Kyce Farrier; Jaime Lee Loy; Hollis Bhopa; Malenee Singh; Brian Ian Matthew Benoit; Ariel Akara Leigh Wolffe; Jeunanne Alkins; Jordan Millar; Ian Raphael Smart; Nissan Reddi Dookeran; Dwight Stephenson; Vijay Dialsingh and Priyabhashani Ramsaroop; Leslie Thais Ovid-Villaroel; Darielle Allard, Jéan-Lé Des Ètages, and Josh Ragbir; Julian Chester, Jason Fraser, Anuja Ramdath, and Sheldon Alexander; Donnell Jeffers; Leonardo Mohamed, Leandro Mohamed, and Alex Mohamed; Kerri Beharry; Nicole John-Thomas; Khemraj Robin Ramkhalawan; Nicholas Cyrus; John Hussain; Ambokile Adio, Asha Thompson-Joseph, and Roland Warner; Ruth Emmanuela Abigail Li, and Ruth Li Legena Henry; Jomo Whatuse; Vernelle A. A. Noel; Priya Elizabeth Maharaj; Adrian Ravi Kishore Ramsingh and Ervin Bailey; Kim Mallalieu, Kevon Andrews, Sean Rocke, Daryl Samlal, and Surujpal Teelucksingh; Fallon Lutchmansingh and Anjani Sharma; Matthew Chandler; Keith Laban; Michelle Abrahams; Marlon Parieaho; Shawn Melville; and Winston Blackwood; Riekael Kezia Kistow; Dominic Alfred; Jesse John Bartoo; Asiya Sanam Mohammed; Khafra Murray; Justin John, Jessey Mitchell, and Tracy Nazia Ruiz.
The board and management of the Council for Competitiveness and Innovation extend congratulations to all winners and thank all those who have participated in the competition. For further information concerning the winners and their projects, please visit the i2i website at; http://i2itt.com
###
For further information, please contact: